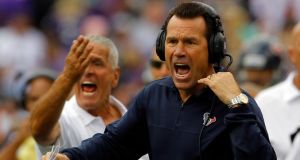 As Kubiak headed back to the locker room at half-time, he collapsed pitchside at Reliant Stadium and, after being treated on the sideline and taken away on a stretcher, was rushed to hospital.

The Texans confirmed “he is conscious and his family is with him” and Phillips — who deputised for Kubiak in the second half — offered further encouragement in his post-game press conference, streamed on the Texans’ website.

“All his vital signs are good,” Phillips told reporters. “He did not have a heart attack but they’re still checking on him.” Asked to reflect on the scenes in the locker room at half-time, he added: “There was a lot of unknown.

“Everything was unknown as to what was going on, what happened to ‘Kube’. It was a shock to everybody. I was travelling in (when Kubiak collapsed) and I saw him on the ground. I kept asking what happened.

“That’s kind of what happened with everyone — ‘What’s going on?’We finally got word they took him to the hospital but we were unsure with everything.”

Lead Rookie quarterback Case Keenum added: “It was really weird (at half-time), they started calling for a trainer and said (Kubiak) had passed out.

“We went back out, they told us he was alright, he was stable, but they didn’t know what had happened yet. We were all very worried and upset about that but trying to stay focused at the same time.”

Keenum had produced a stunning first half to lead the Texans to a 21-3 lead, but the Colts roared back in the second half to win 27-24 as Andrew Luck threw three touchdown passes to TY Hilton.

Phillips refused to use Kubiak’s collapse as an excuse for his team’s second-half woes, saying: “I look at the second half and we had our opportunities. The ball game came down to them playing well, especially at crunch time, and we didn’t. We made all the big plays in the first half, they made the big plays second half.”