The 2013 champion leads by 12 seconds from nearest rival 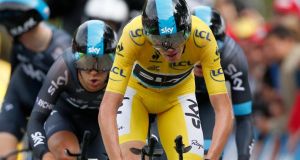 Team Sky rider Christopher Froome leads the rest of his team during the 9th stage of the Tour de France on Sunday Photograph: Sebastien Nogier/EPA

Chris Froome challenged his rivals for the Tour de France yellow jersey to put him under pressure in the Pyrenees after another profitable day on Sunday.

The Briton regards Van Garderen as “the biggest rival” and reckons Quintana and Nibali, in particular, must take the initiative to try to wrestle the maillot jaune from his shoulders.

“This first phase of the race has gone better than any of us could’ve imagined,” said Froome at the end of a challenging first week.

“It’s one thing not to lose any time to your rivals, but to actually gain quite substantial amounts of time on quite a lot of contenders it’s really put us in a fantastic position.

“This next phase of the race the pressure’s certainly not on my shoulders to be making the race and to be having to try to take time back from anyone.

“At this stage it’s for the other guys to try to get the jersey from me now and for us potentially to be riding more of a defensive race.”

Nibali won last year’s race in convincing fashion, but Froome and Contador crashed out while Quintana did not start after winning the Giro d’Italia the prior May.

Italian Nibali was the major loser for a second successive day, having lost touch and 10secs on the ascent to Mur de Bretagne on Saturday.

Froome said: “I’ve got to admit, I am quite surprised he’s lost so much time already.

“I thought he was going to be the one guy from the main contenders who would gain time in this first phase of the race.”

Van Garderen had hoped to become the first American to wear the maillot jaune since a notorious group — Lance Armstrong, David Zabriskie, George Hincapie and Floyd Landis have all admitted to doping — but could yet be the first from the United States to win in Paris since Greg LeMond.

Three-time winner LeMond is the only American champion after Armstrong was stripped of his record seven titles.

Van Garderen is miffed at not being considered a major contender.

He said: “Those guys have that tag, the fab four, which is getting a little irritating.

“All those guys in the fab four have won Grand Tours. If I’m not spoken about as much as those guys are, I understand.

“That doesn’t mean I’m going to be intimidated by them.”

Van Garderen believes the Pyrenees stages, which begin with Tuesday’s gruelling ascent to La Pierre Saint-Martin, will whittle down the contenders further and that the Alps is where the strongest will prevail.

Froome appears confident and was not too disappointed after Team Sky unravelled on the finishing climb to Plumelec to miss out on the stage victory.

The route was technical, twisting and finished with a 1.7km ascent.

Times were given on the fifth rider of the team, meaning unity was important, and Team Sky stuck together well until the road ramped up in the final 500m and that is where the stage win was lost.

The British squad began the ascent with six riders, but Woet Poels fell back and Nicolas Roche admitted being “out of the comfort zone” as he dropped back with the line in sight.

Froome added: “For everyone’s morale it would’ve been fantastic to have been able to get the stage win.

“In the final we saw Nico Roche struggling a little bit up that final climb, but that’s the nature of a team time-trial. He gave so much earlier on.

“We definitely can’t put it down to him struggling up the final climb.

“We really can’t be too disappointed.”