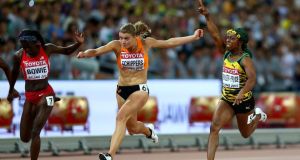 Shelly-Ann Fraser-Pryce of Jamaica celebrates as she crosses the line to win gold in the women’s 100 metres from Dafne Schippers of the Netherlands (silver) and American Tori Bowie (bronze) at the IAAF World Athletics Championships in Beijing. Photograph: Ian Walton/Getty Images

With her long, dyed green braids flowing behind her, the diminutive 28-year-old was not quickest out of the blocks but soon got into her stride and powered down the track to add to her triumphs in Berlin in 2009 and Moscow two years ago.

Former heptathlete Dafne Schippers almost caught her with a brilliant finish but was more than satisfied with her second Dutch national record of the night in 10.81 and first world championship silver.

Like Schippers, American Tori Bowie has not long turned her focus to the sprints and she claimed bronze in 10.86 ahead of 2007 world champion Veronica Campbell-Brown (10.91).

Fraser-Pryce’s time was the second fastest of the year after her own 10.74 in Paris last month but she was not satisfied.

“I get tired of 10.7s,” said the double Olympic champion. “I just wanted to put a great race together. I want a 10.6 something. Hopefully in my next race I’ll get it together. I just work hard and focus on executing.”

Schippers, who also beat her national record in the semi-finals, was delighted to secure silver in her first season after giving up the multi-discipline event to focus on the sprints

“I was a little bit nervous in the semi-finals, and after that I think, okay, I’m in the final, anything is possible. My start was good, I thought I was close enough to medal. Wow.”