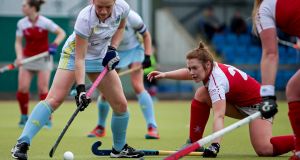 UCD’s Bethany Barr in action with Stephanie Thompson of Pegasus. Barr is among the four new players to be featured in the Ireland squad for a five-day training camp in Spain. Photograph: Laszlo Geczo/Inpho

Twin sisters Bethany and Serena Barr are among the four new names to feature in the 28-player Irish panel named by Graham Shaw for a five-day training camp in Spain, the first get-together for the squad since their World Cup final during the summer.

The camp will include three friendlies against their hosts, a side Ireland got the better of in the semi-finals in August.

The Barrs both started out with Lurgan before moving to the United States where they attended Liberty University in Virginia, Serena now playing her hockey with Beeston in the English Premier League while Bethany is with UCD.

Also called up to the senior panel for the first time are Railway Union’s Sarah Hawkshaw and Amy Elliott, a reward for their fine form in the first half of the Hockey League campaign. Hawkshaw returned to Railway this season after four years at the University of Massachusetts.

Serena is one of seven players included who play their hockey outside Ireland, the others being the German-based Katie Mullan (Club an der Alster), Deirdre Duke (Dusseldorfer), Megan Frazer (Mannheimer) and Nicola Evans (UHC Hamburg). Anna O’Flanagan is currently based in the Netherlands where she plays with Pinoke, while goalkeeper Emma Buckley moved to Royal Racing in Belgium this season.

Five of the squad that took silver at the World Cup – Ayeisha McFerran, Grace O’Flanagan, Shirley McCay, Nicci Daly and Liz Colvin – were unavailable for the Spanish trip, but are likely to return for the build-up to June’s FIH Series event in Dublin where a top-two finish will be required to advance to the final Olympic qualifying event which takes place in November of next year. McCay had intended to retire after the World Cup, but has been reconsidering that decision.