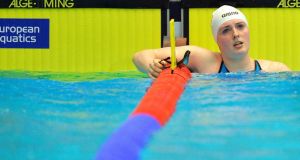 Barry Murphy and Fiona Doyle both finished 15th in their respective disciplines after their semi-finals at the European Short Course Swimming Championships in Denmark.

Doyle was eighth in her 50m Breaststroke semi-final, in a time of 30.97, which was just shy of the 30.80 she posted in this morning’s heats.

Murphy was also eighth in his 100m Breaststroke semi-final. His time of 58.79 was enough to improve dramatically from the 22nd-place finish he had last year (1:00.36).

Significantly, Murphy swam the fastest first 50m of any competitor when he posted a split of 27.06. which bodes well for the 50m Breaststroke event on Saturday, in which he is currently ranked third.

“Overall we had a good day; there was some great swims from Barry (Murphy) and Fiona (Doyle) especially,” said Swim Ireland national performance director Peter Banks.

“ I know they are disappointed not to make finals but the performances bode well for the rest of the week.”

Brendan Hyland, Shani Stallard and Bethany Carson are all back in the pool tomorrow for day two. while Barry Murphy and Andrew Meegan will have a rest day before returning to race on Saturday.

Meegan continued his development in the morning session, after an impresive Irish Nationals, with a personal best swim of 3:49.74 in the 400m Freestyle to finish 4th in his heat.