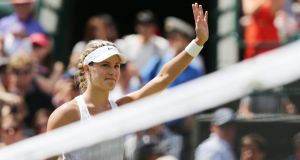 Canada’s Eugenie Bouchard after her 6-3, 6-4 win over Angelique Kerber of Germany in their quarter-final game at Wimbledon yesterday. Photograph: Tatyana Zenkovich/EPA

Angelique Kerber, a hard-hitting, back-court player who knocked out Maria Sharapova, was carved out of the draw by the 20-year-old Bouchard, 6-3, 6-4.

The Canadian, whose straight set wins moves her to eighth in the world, meets Simona Halep, the Romanian 22-year-old, who packed off Sabine Lisicki to review her tennis and her mind.

A 6-4 first set that went against Lisicki came after a good start from the German. But mistakes crept in and slippage began, Lisicki’s lapse swiftly becoming a collapse. Halep managed her end from 4-1 down in the first set to not losing another game, the second set ending a miserable 6-0. It’s a tumble that has sent the amateur psychologists to work on the bewitched German 19th seed.

Halep, has been a well-kept secret and is eager to build on her French open final appearance, where she lost to Sharapova. But in Bouchard, the quarter Irish, French-speaking, former junior Wimbledon champion, the Romanian is meeting a player, much like Grigor Dimitrov in the men’s draw, who is on the most eye-catching rise in the women’s game.

Bouchard comes across as an intelligent player. Her bright and considered engagement in conversation in keeping with a shrewdly mixed game, which is far from just boom or bust.

A fearless approach that embraces net play and taking the ball early has been a feature of Bouchard, who saved four break points in the first set. Kerber offered up five and Bouchard took one in the eighth game for 3-5 and nervelessly served out for 6-3.

While the German left-hander tried to mix it more in the second set coming to the net, the 20-year-old, who was averaging 100mph on her serve, was steely and impressive for such a young player, She didn’t waver and that mental courage could be one of her great strengths.

She dropped her serve in the second set but broke back twice for 6-4, all in 72 minutes. Kerber, who had a tough match against Sharapova the previous day, blamed lack of rest time after Sharapova. “She had much more time to recover after her fourth round,” said Kerber.

Bouchard has a twin sister Beatrice, who does not play tennis but both of them are named after Royal family members. Her brother William is also named after you know who and another sister Charlotte is named after Princess Caroline’s daughter. She comes from an upmarket area of Montreal, where their house was on the same road as former Canadian Prime Minister Brian Mulroney and she attended a leading private school in Canada called The Study in Westmount, Quebec, which dismisses some notions that well heeled is the enemy of ambition in tennis.

They play today along with the other semi-finalists, who are Czech left-handers Lucie Safarova and Petra Kvitova. Kvitova is the only former Grand Slam winner remaining in the women’s draw.