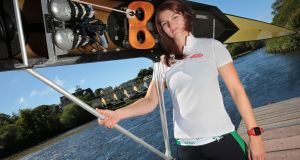 Monika Dukarska’s long-term plans are in the singles sculls.

A busy month starts with very different stories from the two ends of the island. The Erne Head of the River in Enniskillen on Saturday has an excellent line-up which should give some indicators of the battles which will develop in the season ahead. Unfortunately, the Muckross head, set for the National Rowing Centre in Cork on the same day, has had to be cancelled because of a bad weather forecast.

Trinity’s senior men’s eight have been training on the Erne as they prepare for the head and for the Gannon Cup race against UCD on Saturday, March 12th. Seven crews will compete for this pennant at the Erne head, with two crews each from UCD, NUIG and Trinity taking on a strong-looking Commercial eight.

The Trinity women’s eight also set a record last year. The loss of Ruth Morris, who is on scholarship at Loyola Marymount University in California, will surely weaken Trinity this weekend and in the Corcoran Cup. Morris is a talented lightweight who may come into the international reckoning in the years ahead.

Ireland crews for this season will be chosen after the trial on March 19th and 20th. According to Morten Espersen, the Ireland high performance director, speed testing last weekend produced encouraging signs for the hopes of the men’s lightweight four and the women’s pair of Leonora Kennedy and Barbara O’Brien. Should these crews again prove themselves in the trial, they could compete in the World Cup in Italy in Varese in April and, if all goes well, go on to the Olympic Qualification Regatta in May.

Monika Dukarska has dropped out of the reckoning for the pair. The Killorglin woman told the Irish Times that her long-term plans were in the single sculls, and she will compete in the trials with the aim of competing in this boat at the World University Championships.

Sanita Puspure, the premier single sculler of the moment, is targeting the Olympic qualifier and will go to a training camp in Italy before the World Cup with the men’s and women’s lightweight doubles. Paul O’Donovan and Gary O’Donovan are bound for the Olympics, and though Sinéad Jennings and Claire Lambe have, technically, to be confirmed as the crew for Rio, this now seems a formality.

Espersen says that Ireland needs a pre-Olympic camp. A slot in Banyoles in Spain has been booked, though the funding remains to be found, as the recent grants have fallen short. “We can’t really moan about it, we have to carry on,” Espersen said.