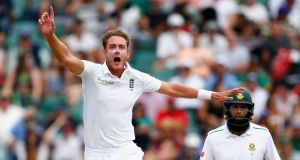 Trevor Bayliss does not take much notice of the ICC rankings. They are, he reckons, for the fans, something to give a context to what is happening in the global game. There is an essential flaw in the team rankings anyway, in so far as they are retrospective: they indicate how good a team was, in much the same way as weather presenters tell you whether it was raining yesterday. So South Africa’s treasured and well-deserved No1 status, now relinquished to India, was a relic of the past, a former glory.

In this series, shorn of great players who have retired and others injured, they have not come close to emulating their predecessors, and, despite the tremendous potential in two young players, Temba Bavuma and Kagiso Rabada, are not likely to do so in the foreseeable future.

For the most part, all but a few sessions, England have dominated the series. In Durban, South Africa were a shambles on the field and off. The captain was already considering standing down and England won the match at a gallop. Cape Town had its draw, with a run-fest and then a last-day fightback by South Africa, when, for the first time, the atmospheric conditions gave the bowlers some movement. Such was the inability to take catches, however, the England bowlers were effectively compelled to take 20 wickets in order to dismiss the opposition once. The manner in which South Africa capitulated against Stuart Broad at The Wanderers was indicative of what could have happened should England have gained a lead of, say, 200 in Cape Town.

England faltered a couple of times at The Wanderers. They were poor with the ball during the first session of the match, when there was plenty in the pitch, allowing the South African openers to get away and help set up what was considered a total beyond what should have been par. There was also a failure to finish off the innings on the second morning, although a decision not to bowl Steven Finn first may have had something to do with the side strain he picked up in the warm-ups that day.

Finn will miss the final match at Centurion and possibly the one-day series as well but once Joe Root, Ben Stokes and Jonny Bairstow helped England to a slender lead, it opened the way for Broad.

If the team rankings are meaningless, the individual ones have a contemporary feel to them and Broad will have woken on the day after the match to find that he is now the No1-ranked Test bowler. Furthermore, Root is the No2 batsman in a maelstrom in which he, Steve Smith and Kane Williamson are vying for the top spot. Broad continues to astound. That he has taken more Test wickets in the past five years than anyone in the world needs the qualification that he has played more games than his rivals but he has become a bowler from the highest echelons, fit to rank with any who has played for England.

Part of his rise to the top has been just a natural process of someone steadily improving with experience, learning the strategies, becoming comfortable with his game. He has managed to develop a capacity to change his length according to the conditions. Tall bowlers generally have a tendency to hang on to the ball that fraction longer to complete the arc of their bowling action, where the release comes at the point of maximum acceleration. It means their default length is further back: they are bang-it-in bowlers. This, though, seems counterintuitive, for tall bowlers ought to be able to gain more lift from further up than a shorter bowler.

For Broad, however, any attempts to pitch further up and allow the ball to swing was difficult. Releasing it that fraction early meant it would float. There was also a suspicion for a while that he tended to protect his figures with an overzealous use of the bouncer at the back end of an over. Now, though, perhaps through the simple expedient of being more upright in his action and leaning back just a little more, he has been able to hit a good length hard.

To this we can add a mentality that intuitively or otherwise allows him to recognise when the moment is right. Broad’s surges bring to mind the inevitability that once came with Curtly Ambrose on a similar roll, something experienced by England to their detriment, and certainly Australia, most notably the famous seven for one spell at the Waca. There becomes an urgency to his run and he hits the crease hard. He has the capacity now, in conditions that favour him, not to strain for wickets but to strive for consistency, knowing that it is this that produces the results. Broad has become a master bowler.

It remains to be seen whether this brings about a change in the dynamic of his bowling relationship with Jimmy Anderson. They have taken more wickets between them, both in collective total and as a pair in matches, than any other England bowlers but it has always been Anderson who is regarded not only as the leader of the gang but as indispensable. Broad, on the other hand, despite their similar records, has always seemed to be the one skirting on the edges of non-selection, at least in the public eye. Rarely has Broad had a choice of ends: at Trent Bridge last summer he did – and took eight for 15.

Now comes the possibility that he might surpass Anderson. Anderson has 429 and Broad 330, so a deficit of 99. Anderson, though, will be 34 in July, whereas Broad will not be 30 until June. At the age Broad is now, Anderson had played 24 fewer matches and had 249 wickets. If he stays fit, Broad could obliterate Anderson’s England record. With a fair wind, he could reach 500.