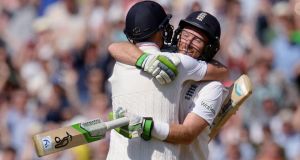 England won the third Test match by eight wickets shortly before 4pm, in front of a raucous Edgbaston crowd. Required to make 121 to take a lead in a series that has lurched from one extreme to the other and now back again, an unbroken third-wicket stand of 73 between Ian Bell and Joe Root saw them home.

For Bell, whose 65 was his second half-century of a match played in some tricky conditions, it was a timely response to those who might have doubted his capacity to fill the number three role, and for the second time he took the game by the scruff after the early loss of a wicket. Root leg-glanced the winning boundary and punched the air in celebration. His unbeaten 38 began with an authoritative first-ball clump to the point boundary and was the measured innings of one of the best young batsmen in the world today.

The teams now move to Trent Bridge, another happy hunting ground for England, with a 2-1 lead, as the chanting occupants of the Hollies stand were only too happy to remind the Australians.

Michael Clarke’s team can take some solace in the fact that England’s record since the first Test in Antigua back in April has been a see-saw sequence of WLWLWLW, with the obvious sequential implication: in the fact also that they do not need to win the series to retain the Ashes, although that is just as well because only in the 1936-7 series in Australia has a team, that of Don Bradman, overcome such a deficit as now exists to win the series.

The Australia captain must now put on a brave face, but he will receive a pasting from his own media. As it stands, no Australian has overseen more losing Test matches away from home than the dozen for which Clarke has been in charge, and his batting is now so sketchy that there are sure to be calls for his removal, not just as captain but as a player.

England will have to make at least one change to a winning team for Nottingham. The side strain suffered by Jimmy Anderson has ruled him out of that match. So there will be at least a pace bowling option required.

The nearest like-for-like replacement, if that is the way England feel they must go, would probably be Chris Woakes, back playing for Warwickshire after a long spell out with injury. It might also give a vision of a post-Anderson future, with Steven Finn rejuvenated, finishing the second Australia innings with six for 79, his best Test match figures, and eight for 117 in the game.

In a difficult game to call, given Anderson’s first innings mastery, Bell’s double contribution, and David Warner’s lone virile resistance that staved off a probable defeat in two days, Finn was a worthy man of the match. Guardian Service