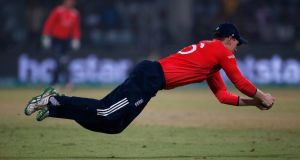 England are on their way to the World Twenty20 final after Jason Roy’s career-best knock and more brilliant death bowling overwhelmed New Zealand.

The Black Caps came into the semi-final with a 100 per cent record but were blown away by seven wickets with 17 balls remaining in Delhi.

They had been kept to a below-par 153 for seven by the constricting efforts of Chris Jordan and Ben Stokes and then looked on as Roy crashed 78 from 44 deliveries.

Roy hit 11 fours and two sixes, scoring more than half of the target on his own, before Joe Root (27no) and Jos Buttler (32no) finished off in a blaze of three maximums in four deliveries.

As punishing as England’s batting efforts were, New Zealand will know they lost this game in the second half of their innings.

Having raced along to 89 for one in 10 overs, they made 64 for seven in the next 10 as England exerted a vice-like grip in the field.

Roy put England ahead of the game from the off, mixing two neat strokes with two big edges to take 16 off Corey Anderson’s opening over.

Buoyed by that start he cut Adam Milne away for four more and powered Mitch McClenaghan down the ground with a punishing straight drive.

Alex Hales had to heave a sweet six over long-on just to grab a share of the attention, but Roy quickly grabbed it back with a dismissive swat off Milne that soared high and handsome over the ropes.

New Zealand sought safety in spin, and leading wicket-taker Mitchell Santner, but he shipped 11 in the fifth over as Roy collected his seventh and eight boundaries.

Roy’s 50, his first in T20 internationals, came in just 26 balls and he was soon reverse-sweeping Ish Sodhi brilliantly between two fielders.

Santner belatedly landed a punch when Hales holed out for 20 in the ninth over and Roy’s entertainment finally ended when Sodhi got one to keep low, bowling him on the charge.

It still seemed too late for a comeback, but Sodhi made it two in two when he had captain Eoin Morgan lbw for a golden duck.

Root and Buttler could have tip-toed home but hit a series of thrilling shots to score 49 at better than 10-an-over.

Buttler brought the finish line into view with two driven sixes off Sodhi and Root crossed it with one his own, pulled beyond mid-wicket off Santner.

New Zealand’s innings got off the usual flier courtesy of, Martin Guptill who cuffed the first ball of the match for four.

David Willey exacted revenge at the start of his second over, slanting one across Guptill, who played for swing and edged behind.

That brought together Kane Williamson and Colin Munro, who went on to share a 74-run stand.

Munro’s second ball went for four, as did three in a row from Liam Plunkett in the sixth.

At the other end Williamson, who offered a fractional chance on one, sprang to life by planting Stokes high over long-off.

The rate continued to rise: 11 off the that over, 12 off the next as Munro reversed his stance and pinged Adil Rashid for six, 11 more as Munro twice edged the ball past leg stump for four.

Then Moeen Ali took out Williamson for 32, showing great composure to gather a skier of a caught and bowled over his shoulder.

At that stage New Zealand were still eyeing 190.

But Moeen’s two overs applied the brakes, conceding just 10 runs, and he was also there to cling on at third man when Plunkett drew a thick slice from Munro (46).

Anderson reeled off a couple of big blows to take his side to 133 after 16 overs, but Jordan and Stokes were brilliant as the closers.

The pair, who also shut out Sri Lanka in the group stage, conceded just 20 runs and one boundary in the final four, during which five wickets fell.

Jordan hit his yorker early and had Ross Taylor caught by a leaping Morgan, finishing with figures of one for 24.

Twice in as many balls Stokes over-pitched but Luke Ronchi and Anderson could only punch the quick, low full-tosses down the throat of long-off.

Santner also perished down the ground in the final over, in which Stokes conceded a miserly three before running out McClenaghan.