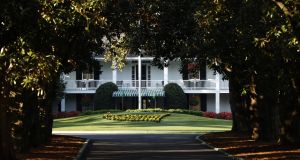 Civil rights groups had called for the Masters to be boycotted or moved from Augusta National. Photo: Jared C. Tilton/Getty Images

At a certain point last week, a civil rights group outraged about Georgia passing voter repression legislation demanded that the PGA Tour and its members take immediate action and either boycott this week’s Masters or move it out of Augusta. Those involved obviously didn’t know much about golf, the tournament and all who sail in her. The Tour has no jurisdiction down Magnolia Lane, the players revealed themselves throughout the Trump years to be an especially spineless bunch and, as for the lads and token lassies (hello Condoleezza Rice) in the green jackets, disenfranchising the poor is hardly likely to cause most of them undue stress.

One more turbulent week around that always frenetic intersection between politics and sport. No sooner had the Republican-led Georgia legislature passed its slate of new voting restrictions (designed to make the process more secure, they claim) than Major League Baseball announced it was moving its annual All-Star game out of Atlanta this July. Driven by the fact “fair access to voting continues to have our game’s unwavering support”, the swiftness of the decision and the boldness of the gesture drew plenty of plaudits in progressive circles. Of course, a cynic might aver that a sport having problems attracting African-Americans on the field and in the stands was merely making a calculated political move to stand against racially-charged legislation.

It’s a measure of the complexity of the issue though that Stacey Abrams, one-time Democratic gubernatorial candidate turned epic grass-roots campaigner in the state, wasn’t totally in support of the move. While appreciating the symbolism of the stance, she pointed out that MLB taking away an event worth $100m to the local economy was going to hurt the working poor most, the very same constituency Republicans have targeted with SB 202. That’s the innocuous title for a piece of legislation designed to make it more difficult for individuals to cast ballots and, ultimately, to allow Republican Party officials to seize control of county election boards.

The whole episode stems from Joe Biden winning the state last November and two Democrats subsequently taking its Senate seats in run-off elections in January. Independent analysts ascribe those historic triumphs in a traditionally red enclave to years of grassroots voter registration and astute organising. Inevitably, Trumpian truth-deniers believe the victories were actually the result of widespread electoral fraud. The sort of chem-trail conspiracy theory nonsense that culminated in the assault on the Capitol on January 6th, it also motivated the Georgia Republicans to use their control of the legislature to push through laws to ensure a Democratic upset never happens again.

Having spent much of his presidency squabbling with the NBA, the pro-Kaepernick factions in the NFL, and much of the sports world, Trump even emerged from his Mar-a-Lago lair to turn his sights on the national pastime.

“Baseball is already losing tremendous numbers of fans,” he declared in a typically shrill statement, “and now they leave Atlanta with their All-Star Game because they are afraid of the Radical Left Democrats who do not want voter ID, which is desperately needed, to have anything to do with our elections. Boycott baseball and all the woke companies that are interfering with Free and Fair Elections.”

What the former president and the members of his cult fail to acknowledge is that Georgia going Democrat had a lot more to do with sport than any perceived malfeasance. Witness the outsized role played by the Atlanta Dream basketball players in working so hard to defeat Senator Kelly Loeffler, the incumbent and owner of their club. The women of the WNBA backed up words and gestures of protest with serious political campaigning against a woman whose extremist right-wing views ran counter to their own. Loeffler lost her seat and has since had to sell her stake in the team.

In the three years that have elapsed since one of the Fox News Channel harridans warned LeBron James to “shut up and dribble”, sport remains one of the busiest fronts in America’s ongoing culture wars. Indeed, there’s an argument that MLB (whose commissioner Rob Manfred, awkwardly enough, is a member of Augusta National) reacted the way it did because during last year’s summer of discontent, baseball was regarded as lagging behind when it comes to matters of social justice. Now, ironically, they have laid down an impressive marker that, as yet, very few seem willing to follow.

Having issued a typically milquetoast statement about voting rights, golf authorities have already vouchsafed that the Women’s PGA Championship (run by the PGA of America) and the men’s Tour Championship (run by the PGA Tour) will both go ahead as planned at Atlanta venues in June and September. A stance unlikely to alienate their fan base, their sponsors or their craven playing population. Like many of the large corporations with Georgia ties, the PGA of America and the PGA Tour obviously believe saying the right thing while doing nothing will be enough to get them out of this jam. And it probably will too unless some sponsors put their money where their mouth is and take a difficult political stance.

Last Monday, Governor Greg Abbot didn’t turn up to throw the ceremonial first pitch at the Texas Rangers’ season opener and announced he’s boycotting baseball. A Republican seeking a third term in office, the Dallas Morning News has described his regime as anti-Mexican, anti-Hispanic, anti-Black and anti-LGBT, and Texas is reported to be interested in adopting the same type of controversial voting laws as Georgia. All in the game.