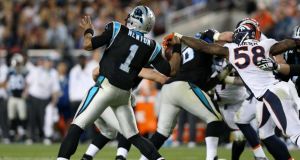 Peyton Manning did warn us that this might be his last rodeo. But even he could not have known how apt an analogy that would be. Super Bowl 50 in Santa Clara was every bit as fierce a test of strength, nerve and willpower as the annual contest between America’s best cowboys and cowgirls down the road in Salinas, California. It ended with Manning’s Broncos bucking, rearing and – perhaps most accurately – kicking their way to a title.

It was defence that won this championship, pulverising the NFL’s newly crowned Most Valuable Player, Cam Newton, and restricting a Carolina offence that averaged 30.6 points per game during the regular season to less than a third of that figure on the way to a 24-10 win. No player was more decisive than outside linebacker Von Miller, named the Super Bowl MVP after his two strip-sacks set up both of the Broncos’ touchdowns.

But Brandon McManus is the name that dominates the box score, with three successful field goals and an extra point. His calm conversions were invaluable on a day when neither offense established any kind of rhythm. Manning completed just 13 of 23 passes for 141 yards and an interception. Along the way he became only the second quarterback, after his boss John Elway, to be picked off in four separate Super Bowls.

None of which will bother him in the slightest. A month shy of his 40th birthday, and five years removed from the neck surgeries that might have ended a lesser competitor’s career, Manning has finally got his hands on the Lombardi Trophy for a second time.

His younger brother, Eli, was celebrated before kickoff together with every other past Super Bowl MVP. Now both siblings can boast a pair of championship rings. And Peyton, most likely, gets to follow in Elway’s footsteps in Denver by going out on top – although he insisted that he still had not made a decision about his retirement just yet during his post-game interview on the field.

“I got some good advice from Tony Dungy, and that’s not to make an emotional decision,” said Manning. “I want to go kiss my wife, kiss my kids, and celebrate with my team-mates. I’m going to drink a lot of beer tonight.”

He had started this game impressively. There was a consensus that Denver’s best hope involved establishing the run, playing ball-control offence and keeping Cam Newton off the field. Crucially, the Broncos must not ask Manning, with his diminished throwing arm, to do too much against a Panthers defence that led the league in interceptions.

The same things had been said before the AFC Championship game against New England. On both occasions Manning ignored them. He dropped back to pass on the first four plays of this game, and found his target on three. For the last, he went deep for Andre Caldwell down the right sideline.

Manning’s delivery was agonisingly slow, the ball hanging in the air for what felt like a lifetime before it finally arrived at its target. But arrive it did, and Caldwell had a 22-yard gain before Tre Boston dragged him down. Who needs a fastball when your receivers can get this wide open?

A pair of CJ Anderson catches took Denver into the red zone before the drive ran out of steam. McManus converted a 34-yard field goal to give the Broncos the first points of the game.

They had failed to match the first-drive touchdown with which they began against New England, but this was still a healthy start in a game featuring two such dominant defences. Both teams went three-and-out on their next possessions. For Newton and the Carolina offence, things were about to get a whole lot worse.

Dropping back to pass on a third-and-10 from his own 15-yard-line, Newton failed to spot Miller racing around the right side of his line. The linebacker crashed in, ripping the ball from his grasp. Defensive tackle Malik Jackson recovered it in the end zone for a Denver touchdown.

“My eyes just got wide open man,” said Jackson as he recalled the play in the locker room afterward. “When I saw the ball I just wanted to make the play for my team. I did that, and then I just started running [TO CELEBRATE]. I’ve never played offence in my life, so with all the fans cheering for you, I didn’t know what to do. I just threw the ball. I probably shouldn’t have done that.”

A further exchange of punts followed, and the quarter ended with the Panthers trailing by 10. The pressure was on Newton to bring his team back into this contest. That he did on the next series, alternating deft throws with characteristically decisive dashes around either side of his line.

Twice he picked up first downs with runs longer than 10 yards, but it was a whipped pass to Corey Brown, supplemented by a face-mask penalty against Denver’s Aqib Talib, that took his team down to the one-yard line. From there, Jonathan Stewart leaped over the line and into the end zone.

Momentum seemed to be with Newton and company as Denver once again stalled. But Carolina, too, went three-and-out. Then Jordan Norwood, fielding the punt for the Broncos, made a reckless decision not to signal for a fair catch as he moved up into a crowd of Panthers.

On another day, this move might have backfired horribly. But Norwood snared the ball and, taking advantage of his opponents’ surprise plus some excellent blocking, escaped to the right sideline. He sprinted all the way to the Carolina 14.

The Broncos’ offence still could not get into the end zone. A holding call on what had been a successful fourth-down attempt denied them a fresh set of downs at the Carolina three, and they instead contented themselves with another McManus kick.

They should have added more points before the half. Starting with strong field position once again after Danny Trevathan recovered a Mike Tolbert fumble at the Denver 40, the Broncos edged their way into field goal range, before Manning was picked off by the unlikely figure of Kony Ealy. The defensive end had dropped into coverage and reached out an arm for a startling one-handed grab on a pass intended for Emmanuel Sanders.

Still, the Broncos’ defence yielded nothing. The half ended on a sack of Newton by DeMarcus Ware, and the quarterback headed into the locker room having completed just eight of 19 passes for 95 yards.

The Panthers trailed by six points, but would get the ball to start the third quarter. They looked to be making the most of that opportunity as Newton hit Ted Ginn on a deep crossing route and the receiver knifed through the defense to make it a 45-yard gain. But once again, Carolina got bogged down.

When Newton’s pass for Greg Olsen fell incomplete on third-and-11 at the Denver 26, Graham Gano trotted on to attempt a 44-yard kick. His attempt clanged off the right-hand upright. Newton could only watch in frustration as Manning, with a pair of big completions to Sanders, led the Broncos down the field for a successful field goal of their own, making the score 16-7.

The miscues kept coming for Carolina. After taking back into Denver territory on a 42-yard heave to Brown, Newton was intercepted by TJ Ward – his pass hopping off Ginn’s hands and into those of the Broncos’ safety.

Not until the fourth quarter did the Panthers finally put some more points on the board. Ealy was the catalyst, sacking Manning and forcing a fumble that was recovered by Charles Johnson at halfway. Seven plays later, Gano slotted a 39-yard kick through the uprights.

But this was not the beginning of the comeback that they craved. Time continued to drain away as the two teams went back to swapping punts, but with just over four minutes remaining Miller made his second decisive intervention – this time knocking the ball out of Newton’s hands as the quarterback was pulling it back to throw.

“It just shows what type of defence that we’ve been playing,” Miller would say afterward when asked about his remarkable night. “It’s honestly not about me. If I could cut [THE MVP]award, I would give it to DeMarcus [WARE]and [DEREK]Wolfe and all the other guys. That’s what I would do.”

TJ Ward recovered at the Carolina four. The Broncos’ offence got its only touchdown of the night four plays later, as CJ Anderson ploughed into the end zone – after a defensive holding penalty on third down had gifted Denver a fresh set of opportunities.

There was time yet for Carolina to get the ball twice more – and for Newton to be sacked for a sixth time. He was in no mood to discuss what had gone wrong afterward, walking out of his post-game press conference after answering only a handful of questions, mostly with one- or two-word replies. Rodeos can be a painful business, when you’re dealing with Broncos that fight as hard as these.