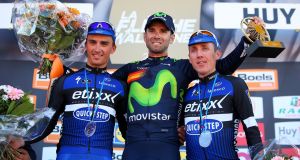 Continuing a strong run of performances in the race, Dan Martin clocked up an excellent third place on Wednesday in the Flèche Wallonne Classic in Belgium.

The Irishman was strongly positioned in the finale of the race, being located near the front of the peloton on the final climb of the Mur de Huy, and opened up the uphill sprint inside the final 200 metres.

The move appeared to be designed to set up his Etixx-QuickStep team-mate Julian Alaphilippe but the young Frenchman was beaten to the line by four-time winner Alejandro Valverde (Movistar). Martin followed the duo over the line.

Wednesday’s podium finish follows on from previous placings of sixth in 2012, fourth in 2013 and second in 2014. It shows he is in strong form after what has been a solid opening four months with his new Etixx squad.

Next up for Martin is Sunday’s Liège-Bastogne-Liège, a race in which he has an even stronger history. He won the event in 2013 and looked poised for victory one year later, closing rapidly on the lone leader inside the final 500 metres, but crashed on the final corner.

Martin has worked hard to be in a position to win and after coming up a little short in Flèche Wallonne, will be fired up for Sunday’s race.