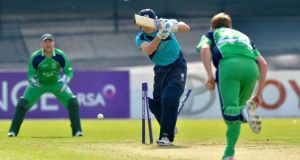 Craig Young made a stunning start to his One-Day International career as he claimed a five-wicket haul in Ireland’s seven-wicket hammering of Scotland in the first of three games at Malahide this week.

The 24-year-old from Derry has had to bide his time before making his first ODI start, but the retirement of Trent Johnston opened up an opportunity and Young certainly took it after Ireland put the visitors in and skittled them for 172, leaving almost 10 overs unbowled.

Although never a fluent batting strip, Ireland’s batsmen showed much more application with Andrew Balbirnie (38) and Stuart Thompson (35 not out) making ODI best scores, while skipper Kevin O’Brien went past 2,000 runs in ODIs with a ninth half-century, finishing unbeaten on 56 as victory was secured in the 37th over.

Coach Phil Simmons has marked these three games down as a final trial for his 18-man squad to travel to Australia and New Zealand for a World Cup reconnaissance tour later this month.

And it was Young that held his hand highest on a fine day in Malahide.

Taking the new ball alongside Max Sorensen, Young had no luck with his first three overs from the Castle end before switching to the Dublin Road where Sorensen had already removed opener Matty Cross.

Young enjoyed success with the second ball of his second spell when dangerous Warwickshire batsmen Calum MacLeod edged to John Anderson at first slip and he would clean bowl both Hamish Gardiner and Scottish captain Preston Mommsen to claim figures of three for 17 for the spell.

Andrew McBrine also enjoyed success early on his ODI debut as he held an easy return catch to remove Richie Berrington for two with his fifth delivery at this level.

The Donemana off spinner also induced a poor shot by Josh Davey when he lobbed up a catch to Stuart Thompson at mid-wicket.

Scotland’s morning was summed up by the dismissal of Freddie Coleman after the Warwickshire batsman got a touch to Thompson’s loosener way down the leg-side to go for 23 and leave the visitors on 101 for seven in the 26th over.

Michael Leask’s run-a-ball 50 and 54-run eight-wicket partnership with Safyaan Sharif (18) helped Scotland recover somewhat before Young returned for his third and final spell to dismiss both and become just the third Irish player to take five wickets in an ODI and the ninth player in history to do it on debut.

Ireland faced a tricky half-hour before lunch after bowling Scotland out in the 42st over and lost another debutant in Merrion opener John Anderson for nine, with Andrew Balbirnie and Andrew Poynter making it to the interval with Ireland on 28 for one after eight overs.

Poynter went for 16 after he got an inside edge through to wicket-keeper Cross off Josh Davey, while Balbirnie played some impressive strokes before departing in the 25th over for 38 to leave Ireland on 93 for three.

Stuart Thompson came up the order to join O’Brien and the pair saw Ireland home, adding an unbeaten 73 runs against a Scottish bowling attack that were always up against it thanks to their woeful batting display.

Ireland will now aim to wrap up the three-match series in Wednesday’s second encounter at the same ground, with play getting underway at 10.15am.