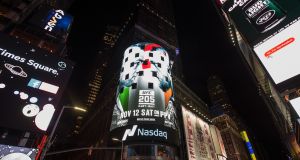 The gentle irony about Conor McGregor right now is that for all his absurdities and shambolic self-promotion he may not even realise he’s on to such a good thing. Everyone has their own opinion about his fame and notoriety and which comes first but when my dad asked me did I know McGregor was fighting in Madison Square Garden on Saturday night there’s no denying this is his time.

He’s of that generation, naturally, not McGregor’s, when competing in The Garden – no matter what the sport – represented something of the zenith of their career. He ran there himself not long after Ronnie Delany was sporting royalty in New York City and when the Millrose Games could well be equated to what an event like UFC 205 is today.

Not as heavily promoted, obviously, but when people talk about the Irish voice in America – where that has come from, where it’s going now that Donald Trump is US president-elect – it’s often forgotten how important a role sport played in that. And like him or not, McGregor is now the voice of Irish sport in America.

It’s gently ironic too that McGregor takes to the cage inside The Garden not long after displaying some typical ignorance towards some of those original voices, when, ahead of UFC 196 in Las Vegas back in March, he famously declared himself “the first Irishman to grace the cover of Sports Illustrated”.

Except, of course, he wasn’t. Indeed, nowhere was the voice of Irish sport in America heard louder than inside The Garden, when first Delany, then Eamonn Coghlan, were at their peak – both of who of course beat McGregor to the cover of Sports Illustrated long before he was even thought of.

Not for the first time McGregor ended up shining a light on his own deluded sense of his own importance. It also reflected the notion that some fans of UFC believe that nothing has mattered as much in sport before McGregor came along, even if the sport is only beginning to find itself and its tradition, whatever that may be.

The athletics tradition in New York is not what it used to be (aside from the record 51,388 finishers from 51,995 starters in last Sunday’s New York City marathon). When Delany made the cover of Sports Illustrated in February 1959, three years after winning his Olympic 1,500m gold medal, it was when he extended his four-year unbeaten indoor streak to 40 races (33 over the mile), while also lowering the world indoor mile record to 4:01.4.

Such was Delany’s absolute dominance that I had to check with him whether he actually lost a race inside The Garden.

(His 1959 indoor mile world record is worth revisiting in the video below).

This, by the way, was inside the “old” Garden, and not even the original one at that. Named after James Madison, the fourth US president, the first two locations, from 1879, were on Madison Square, before it was moved to a third location on 8th Avenue, at the east end of Hell’s Kitchen, from 1925 to 1968.

This of course wasn’t just Delany’s arena but the original home of the New York Knicks and the New York Rangers ice hockey team. Jack Dempsey, of Irish, Cherokee, and Jewish descent, defended his world heavyweight title in The Garden in 1920 and for years ran a restaurant just up from the ‘third’ Garden, where Delany would often feast on 99 cent hamburgers during his unbeaten indoor run.

In 1968 The Garden moved to its current location in Midtown Manhattan, right on Penn Plaza, and three years later staged The Fight of the Century, when Joe Frazier beat Muhammad Ali after 15 rounds.

It was also here that Coghlan first made his mark (while also making the cover of Sports Illustrated not once but three times). In 1977 Coghlan won the first of a then record seven Wanamaker Mile races in The Garden, following Delany’s four wins, and followed by Marcus O’Sullivan and Niall Bruton, and later Mark Carroll in 2000. Those five Irish men alone have won the Wanamaker Mile 19 times between them, although that part of Irish athletics tradition is now dead.

Into this arena, then, steps McGregor, The Garden capacity of around 20,000 sold out weeks ago, the absolute cheapest ticket (according to a friend who has just travelled over the fight) costing $500. And whatever about tradition, there’s no denying the sense of history, the first UFC event to be licensed in New York State since the sport was founded, in 1993.

It was impossible not to notice McGregor’s image all over Times Square whenever Tuesday night’s presidential count went live to New York, which by accident or design, has somehow brought this fight closer to home.

McGregor, should he beat his Philadelphian opponent Eddie Alvarez, will also become the first UFC fighter to hold two belts simultaneously: at lightweight and featherweight (and after the two welterweight fights against Nate Diaz, his defeat, then victory in the rematch).

The strange part, then, is that McGregor still can’t quite grasp all this, allowing Thursday night’s press conference to promote UFC 205 descend into the usual theatrical farce, threatening to smash a folded chair on the skull of Alvarez, after showing up now unfashionably late wearing a white fur coat and what looked like red pyjama pants.

“Suck these big Irish balls,” McGregor shouted at Alvarez, not once but twice, which probably isn’t what America wants or needs to hear right now.