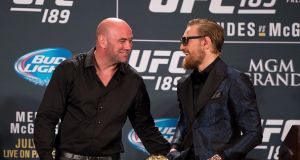 For three years, Conor McGregor and the UFC have been very good for each other. McGregor’s searing wit and feisty charm mixed with an uncanny ability to predict – most of the time – exactly what he would do in the octagon has helped thrust the league into the mainstream. And the UFC has made a plumber’s apprentice from Dublin wealthier than he could ever dream.

But eventually McGregor’s ambitions were going to rub against the UFC’s proclivity for tight control. In the days before his loss to Nate Diaz at last month’s UFC 196 McGregor dropped hints that he wanted to be bigger than the organization that made him. Now, with both fighter and league at their most popular, the two sides seem to have collided with no certainty that they will ever fit back together again.

It’s hard to know if McGregor’s tweeted retirement announcement on Tuesday is truly a farewell to UFC. He left no other clues about his intentions. For a fighter whose mind and words are weapons as effective as his fists, the tweet did not have an air of finality. He did not take shots at the UFC or their leaders. He did not burn a path back to the cage. He simply said he was gone.

The explanation UFC president Dana White offered to ESPN a few hours later, that McGregor had been pulled from July 9th’s UFC 200 for what amounts to insubordination, spoke even more to a power struggle. White said McGregor refused to appear at a press conference later this week in Las Vegas to promote UFC 200 and also shoot the traditional pre-fight video that the organization has uses to market their signature events.

“You can’t decide to not show up to the [PROMOTIONAL]events,” White said. “You have to do it.”

White said he had several conversations with McGregor over the past several days and reported that the fighter would not leave a training camp in Iceland for the press conference. After hours of haggling, White said, he told McGregor that the UFC had booked a seat for him on a 2pm flight. If he wasn’t on that plane he would be yanked from UFC 200. Not long after, McGregor tweeted his retirement.

“Is Conor retiring? Only Conor can answer that question,” White said. “But he’s not fighting in UFC 200.”

McGregor’s intentions remain a mystery. No fighter today, aside from maybe boxer Floyd Mayweather, can manufacture drama – and attention – like McGregor. In the weeks since his loss to Diaz alone he has suggested any number of fights for 200, accepted a rematch with Diaz and now apparently retired just months before what White has heralded as the UFC’s signature event to be held in Las Vegas’s new T-Mobile Arena.

The coming weeks will be undoubtedly be filled with carefully constructed public barbs between McGregor and the UFC. Unconfirmed reports on Tuesday night suggested that McGregor wanted significantly more money than White was willing to give to headline UFC 200.

Fighter pay has long been a sensitive subject for the MMA’s top league. Part of the league’s appeal is that it is tightly controlled, with White choosing fight cards that maximize interest, removing all the dysfunction of boxing’s myriad organizations and belts. But the UFC is also notorious for low pay. An Outside the Lines report in 2012 quoted several UFC fighters as saying they made tiny sums for their bouts and refrained from complaining out of fear they would be banned from the league.

The UFC has always paid a handful of fighters much better than others, but even the biggest paydays are minute compared to the riches boxing promoters hand out. A common refrain is that the UFC gets rich on the backs of those who are shedding their blood. McGregor set a MMA record when he was paid a guaranteed $1m for UFC 196 along with a piece of the pay-per-view proceeds that added several million more. But it paled in comparison to the more than $200m Mayweather earned in his May 2015 fight against Manny Pacquiao, held in the same arena (the MGM Grand Garden) as UFC 196.

McGregor has seemed to be testing the UFC’s structure for several months now. After his 13-second knockout of Jose Aldo last December he began to talk about his newfound power. At the post-fight press conference he said he might have built enough capital in the organization to dictate where his fights will be held. Then in the run-up to UFC 196 he chided White a few times in public appearances, said he did not like fighting in Las Vegas and said the pre-fight promotional videos – like the one he refused to do on Tuesday – were stale. He hinted at a desire for more power in an organization that doesn’t surrender authority.

He had become increasingly difficult for the UFC to handle. Attempts to corral him to do traditional interviews in March were fruitless. He balked at an appearance on Conan O’Brien’s late-night TV show and yet was a fantastic guest when he relented. It seemed clear, even with his loss to Diaz, that McGregor was going to keep pushing against the UFC’s structure.

At 27, with the potential to make many millions more, McGregor doesn’t seem a likely candidate to walk away from fighting. His sudden following of a handful of WWE executives on Twitter along with recent Twitter posts of his Iceland training look almost like challenges to the UFC to put on July’s big show without him and top female draw Ronda Rousey, who is still recovering from injuries sustained in her last fight.

Others have noticed, with one fighter, Jamie Varner, using McGregor’s announcement to call for a UFC union.

The UFC will have their big press conference for UFC 200 at the end of this week. They can’t have a public unveiling of the entire card without their headline fighter. A replacement will have to be named. But plenty of time remains before 9 July and White and McGregor and a lot of money is at stake for both McGregor and the UFC.

“I get accused of coddling Conor all the time, but at the end of the day Conor is a guy I respect,” White told ESPN on Tuesday, careful to say nothing too toxic about his biggest star. “He’s taken fights on short notice and literally saved the show at times. But it doesn’t make you exempt from showing up for the press conference and the pre-promotional events. We paid a lot of money for this stuff. It’s mandatory.”

Now his biggest fighter is testing the meaning of what exactly is mandatory in the UFC.

1 Seán O’Brien: Anger over my parents’ break-up never left me
2 Ireland get the job done against Italy to keep alive Six Nations hopes
3 France warm up for Ireland with impressive win over Wales
4 Ireland 50 Italy 17: Ireland player ratings
5 Hugo Keenan and Will Connors: The best of friends, the best of debuts
Real news has value SUBSCRIBE