Conor McGregor ready to back up the talk against Brandao

Conor McGregor weighs in for his UFC bout against Diego Brandao in the O2 on July 19. UFC President Dana White hails it as 'best ever weigh in'. Video: Darragh Bambrick 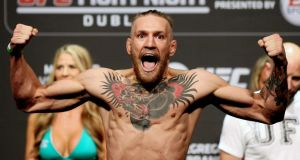 Dublin’s Conor McGregor at the weigh-in for his fight with Diego Brandaoat the O2 Arena. Photograph: James Crombie / Inpho 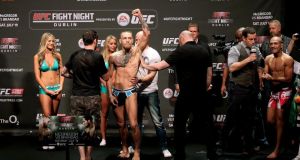 Conor McGregor salutes the crowd at the weigh-in for his fight against Diego Brandao (far right) . Photograph: James Crombie / Inpho

Conor McGregor sees himself as something of prophet, a man who at various stages has foreseen the future and is leading his people along that predestined path to the promised land of the Ultimate Fighting Championship.

Naturally for someone with McGregor’s seemingly unerring self-confidence that future is invariably bright and will blossom further tonight “when” he beats Brazilian Diego Brandao in the first round of their five-round main event at the O2 Arena.

Brandao, from the tropical city of Manaus that played host to four World Cup games, has pedigree, and has dismissed this latest prediction of McGregor’s as the musings of a “clown”.

MMA and boxing may not have much in common for the purists, but they do a similar line in pre-fight hype.

No better man than McGregor. He can, indeed, play the fool, but he has delivered spectacularly on all the talk so far and the fact tonight’s event sold out in 35 minutes suggests his public are enjoying the ride, though they’ll hopefully be happy if his weigh-in prediction of taking Brandao’s “head clean off” falls short.

Such hyperbole will probably do the sport no favours with the naysayers, who are either yet to be convinced or adamant that they never will be, but it’s just five years since the bloodiest boxing battle of national hero Bernard Dunne’s career at the 02, during which veteran and gentleman broadcaster Jimmy Magee warned: “Another left hand [from Dunne] would almost tear the head off the Panamanian world champion [Ricardo Cordoba].”

In terms of how things might pan out tonight, McGregor’s a hard man to predict. He will stand and he will fight but what he throws and when he throws it can be anyone’s guess. In his 14-2 career so far (two fights in the UFC) he averaged 4.59 “significant strikes per minute”, around 76 per cent greater than the UFC mean of 2.61.

His UFC debut knockout of Marcus Brimage in Sweden was the third quickest introductory win in featherweight history, taking 67 seconds.

Brandao would prefer to go to ground, in that case, and with the fifth highest takedown average in UFC featherweight history he’s likely to try and do just that, though McGregor’s performance when grappling with Max Holloway after his knee “popped” in Boston last year was better than many expected – he landed four of five takedown attempts with a torn ACL.

That injury in August pre-empted some pretty serious rehab for the Dubliner but he insists he’s coming back stronger and wiser, in terms of his own physicality.

Brandao, with a record of 22-9, is coming off a defeat to Dustin Poirier (ranked sixth) but the winner of the 14th season of The Ultimate Fighter, who was drafted in as a late replacement for Cole Miller, is keen to take his shot at redemption and is a step up for McGregor.

With the crowd, momentum and power on the side of the Crumlin 26-year-old it looks more likely to be a good day for Irish MMA and McGregor fans, of which there are very many around the world.

By the time he reaches the ring, of course, there will have been nine fights and four other Irishmen in the ring.

Antrim lightweight Norman Parke is the only other one on the main card and will look to improve on his 20-1 record against Japan’s Naoyuki Kotani.

1 Frustration for Lowry and McIlroy as Li leads at US PGA
2 Michael Walker: Pressure mounts on Barcelona to stop slide
3 Juventus to ‘evaluate everything’ after European Cup exit
4 Sporting Cathedrals: Semple Stadium, the very centre of the hurling universe
5 Sene Naoupu turning mind back to rugby after health scare
Real news has value SUBSCRIBE

Juventus to ‘evaluate everything’ after European Cup exit 12:06
Billy Vunipola fears Saracens demotion will hinder Lions hopes 10:48
Frustration for Lowry and McIlroy as Li leads at US PGA 09:14
Michael Walker: Pressure mounts on Barcelona to stop slide 08:00
Rubber about to meet the road as counties weigh up financial hit 06:00
Here is your handy guide to sport on television this week