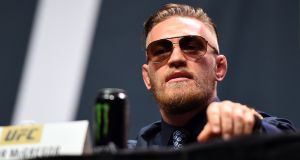 When this imbroglio finally blows over, we can explore what Conor McGregor has against Connecticut. For now, let’s concentrate on this game of poker between the boy from Crumlin and the UFC. So – breathe out – the featherweight champion has not retired and he still wants to fight Nate Diaz at UFC 200. And it might be tempting to conclude too that he’s coming to understand the concept of less is more. But breathe in again, it appeared on Thursday night that Dana White and the Fertittas were still not for moving.

“It’s time to go back and live the life that got me this life,” McGregor wrote on Facebook yesterday. “Sitting in a car on the way to some dump in Connecticut or somewhere, to speak to Tim and Suzie on the nobody gives a f**k morning show did not give me this life.”

Forget the tattoos, the tailoring, the strut, the jutting chin; forget the wingspan he displays when Bruce Buffer calls his name; and that slithery walk where it appears he can get down on all fours and enter a room without opening the door. They are neat additions to the McGregor package. But his stardom is built on fighting, and fight talk. It’s his words we must come back to, sometimes comical, always unvarnished and delivered smoothly in a thick Dublin brogue. It’s an ability that has made the UFC millions.

But McGregor is tired and on a losing streak. He no longer wants “1 million interviews and two million photo shoots and at the end of it all I’m left looking down the barrel of a lens, staring defeat in the face, thinking of nothing but my incorrect fight preparation”. And who can blame him?

McGregor wants to skip the press events in Las Vegas and Stockton (Diaz’s home town) and attend the final one in New York. It seems reasonable as a compromise. “There had been $10 million allocated for the promotion of this event is what they told me. So as a gesture of goodwill, I went and not only saved that $10 million, I then went a tripled it for them. And all with one tweet.”

I've got my bills paid. My money made. And the entire game slayed. #YourMove pic.twitter.com/wOgbNgUPVd

It’s a good point. This weekend Jon Jones is making his long-awaited return to the octagon. He’s the best fighter of all time and nobody is talking about him.

McGregor’s statement spoke of a burning desire to be successful. Sometimes we can forget that there is more to McGregor than how he spends his money. There’s how he spends his time. Perhaps the most important seconds of his career were the 38 he shared in the octagon with Joe Duffy six years ago. Duffy submitted McGregor and it was when McGregor learned pugilism alone, even of the awesome variety, would not suffice in the world of MMA.

He reacted by doubling down on his career and becoming a much better fighter. In the first week of 2013 he was a two-weight world champion in Cage Warriors. For the next three years he was paraded around the world by the UFC – blowing kisses along the way to belligerent Brazilian fans in Rio and always knocking it out of the park when he had a microphone in hand – and he didn’t lose again until he fought Diaz last March, an event described by White as the most financially successful in UFC history. Like Duffy, Diaz won via submission. McGregor’s detractors pounced. It was his jiu-jitsu skills. They are terrible. They aren’t. McGregor was a beaten docket before it went to the floor.

Listen to McGregor’s words before he and Diaz come together for round two. “I can go all day.” But he couldn’t. He looked more like a man who was coming down with flu. McGregor launched bombs at Diaz, who stood like an Easter Island statue absorbing them. There was little combination punching. There was no jab. It was mainly uppercuts from the right hand.

Diaz boxed smartly. He chipped away with jabs and when McGregor lunged he landed check hooks. And then he caught the Irishman with that straight left, and in this chapter of his life McGregor never look smaller. Like the rest of the world, he underestimated Diaz.

If he’s granted the opportunity, he’s unlikely to do so again.

“I must isolate myself now,” he said. “I am facing a taller, longer and heavier man. I need to prepare correctly this time.”

Alexis Sánchez joins Inter to save Man United €46.5m in wages 12:06
David McGoldrick named Republic of Ireland player of the year for 2019 10:57
‘Slim to no chance’ of Nick Kyrgios playing in French Open due to Covid-19 fears 09:27
Bryson DeChambeau trainer insists muscle gain is not down to steroids 09:05
Golf Majors return with US PGA, Man United progress in Europe 07:39
Here is your handy guide to sport on television this week