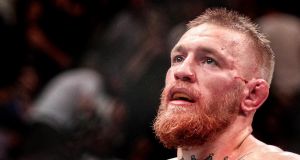 Conor McGregor: “I’m humble in victory or defeat. I took a chance to move up in weight and it didn’t work.” Photograph: Raymond Spencer/Inpho

On the bright side, he still has his featherweight title – but other than that, pretty much everything went wrong for Conor McGregor on Saturday night when Nate Diaz choked him into submission in Las Vegas to bring the Notorious juggernaut to a shuddering halt.

“I’m humble in victory or defeat,” McGregor said. “I took a chance to move up in weight and it didn’t work.”

Diaz’s second-round stoppage handed McGregor his first defeat since November 2010, a loss that also came as a result of a choke hold, that time applied by his countryman Joseph Duffy.

Duffy’s victory in McGregor’s sixth professional fight was barely noticed at the time, but the choke administered by Diaz has reverberated around the fighting world and brought McGregor crashing back to earth.

All week the talk had been about whose belt McGregor would take next, with the lightweight belt of Rafael dos Anjos and Robbie Lawler’s welterweight title seemingly up for grabs.

Nobody talked it up more than McGregor himself.

He even spoke of creating his own belt that he could fight challengers for. Saturday night would be a rehearsal for a fight against Lawler.

Asked at Thursday’s press conference what his dream fight would be, his answer was typical of himself.

“I’d love to fight myself if I really could,” he proclaimed. “Imagine the numbers that would do, if there was two of me.”

McGregor started Saturday’s fight seemingly trying to fulfil his “Mystic Mac” prediction that it would all be over in the first round.

Seeking a repeat of the punch that consigned José Aldo to the ranks of the ex-champions, he swung a slew of haymakers with his left hand, catching Diaz with several and opening a nasty cut over his right eye.

But unlike Aldo, Diaz remained upright, leaving McGregor seemingly incredulous as to why his best shots weren’t dropping his opponent.

The 30-year-old Californian has been around the UFC for a long time, mostly due to his attitude and his teak-tough demeanour. McGregor’s punches may have hurt him, but they were nowhere near enough to stop him.

In the second round McGregor came out with the same game plan, still trying to finish the fight with a punch he could add to his highlight reel.

When asked about the key to his success in the UFC, McGregor always comes back to the same thing: putting in the hard work that lays the foundations for victory.

But at the MGM he seemed loath to do so. Instead of working his opponent, he continued to chase the single strike that would lay the American out and end the fight, but it was nowhere to be found.

Instead, it was Diaz who struck hardest, clocking McGregor with a left hand that rocked him and set the alarm bells ringing for the thousands of Irish fans in the stands.

Sensing that his opponent was wounded, the bounce was suddenly back in Diaz’s step as McGregor sought refuge to recover in the octagon.

Desperate to stay in the fight, McGregor decided to take the fight to the mat to see if he could survive. It was a dreadful mistake.

Diaz pounced, pummelling McGregor with punches, forearms and elbows. Bewildered, McGregor sought to reverse his error. In doing so, he made another, allowing Diaz, a jiu jitsu black belt, to mount him and flatten him against the canvas. The moment he did so, it was a matter of when, and not if, the fight would end in his favour.

Aldo tweeted in celebration at McGregor, calling him a “pussy” and saying he’d see him at UFC 200 for a rematch.

McGregor’s response was to say that his next fight would most likely be to defend his 145-pound belt, possibly against Aldo.

How much of that is his decision is open to question. Diaz proved that he is deserving of another shot at a world title, either at welterweight or lightweight. Having won against McGregor in a fight that delivered a huge pay-per-view audience and a sellout crowd at the Grand, the UFC will have to find some way of rewarding him.

For McGregor, his decision to defend the belt he holds is a far cry from all the talk of dominating weight divisions. Though he banked another few million from it, this defeat put McGregor back among the mere mortals of the fight game.

It also handed back a measure of control to Dana White and the UFC, who spent the last week looking increasingly like McGregor’s private promoters.

But McGregor is far from a beaten docket. However tough it may be to accept, one defeat is nothing in the grand schemes of things in mixed martial arts.

“This is the game,” McGregor told reporters as he absorbed the defeat. “We win some, we lose some. I will never shy away from a challenge.”

McGregor’s biggest challenge now is not what title he should fight for – it is simply to get his juggernaut back on the road and up to speed.