Chris Pelow: A rare cancer took a bite, but failed to slow him down

A diagnosis of synovial sarcoma led to hockey-palyer Chris Pelow requiring leg amputation. But within months, Chris was running on a treadmill, and six months after the operation, he played in an indoor hockey match with his old team. 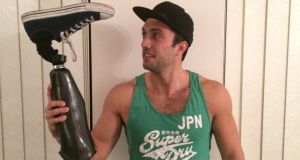 Chris Pelow holds his prosthetic leg: “When you get knocked down, you have to get right back up”

After playing for the Ireland under-16 hockey team, Chris Pelow moved seamlessly to the under-18 national squad, before joining the Ireland A side and then the Irish senior training squad.

Such talent brings with it a passport, and seven days after playing for Dublin club Corinthian in the Irish Hockey League against Lisnagarvey on March 19th, 2011, in Lisburn, Chris played for Sydney University’s first team.

Not for the first time – or last – he hit the ground running and, after settling down in a job with TRC recruitment, he was glad of the break when hockey’s off-season in Australia finally arrived later in the year.

“I had just come straight from a season in Dublin, so I had played for a year straight, and was looking forward to a bit of time off to be honest.”

Christmas on Bondi Beach. Life was good for the 23-year-old.

By February, pre-season training had started, and soon included fitness training at 8am every Sunday – “not fun if you’d had a few beers the night before”.

Chris took a knock to his left foot. “At the start, I only felt it after running for about 20-30 minutes or so and I’d have to pull up, but as the weeks went on it was getting sore during the day, if I ran down a set of steps for example or turned quickly on it.”

A podiatrist, Damien Cunningham, played masters hockey at Sydney University and he fitted Chris in early one morning. After a quick trip to a sports clinic at Allianz Stadium for an MRI, Chris was back in work by lunchtime. Injury forgotten.

That evening, Damien called. The radiologists weren’t happy. He needed to see an orthopaedic surgeon the next morning. It was looking unlikely he’d be playing hockey at the weekend.

The surgeon was Sanjeev Gupta, another former Sydney University player. Chris expected to be told about a muscle problem, but instead cancer was mentioned as a possibility.

An X-ray and Cat scan later, Chris was back in work. Injury not forgotten.

Sanjeev rang that evening – the scans were inconclusive and biopsy was needed. This was Friday, so the biopsy would take place Monday morning. No hanging about in the Australian health system.

“He said that if it did turn out to be a tumour and it was serious, then worst-case scenario would be amputation of my left leg! I couldn’t believe how serious this was getting. Like, my foot wasn’t even that sore, I was walking around fine.”

It was a weekend Chris had been looking forward to for months. His schoolfriend Willis arrived from Dublin on the Saturday morning. Beach, music festival, drinks.

Monday clouded the weekend. Had to be some mistake.

Monday. Dr Sanjeev Gupta was standing beside the bed when Chris woke from the anaesthetic.

Initial prognosis not good . . . pathology results Friday . . . rare cancer . . . synovial sarcoma . . . and that word amputation again. Chris wondered had he really woken up from the anaesthetic.

His parents flew in from Dublin on Thursday. “We hung around in a daze,” says his dad Ronan, “just waiting in dread for the oncology team to review the histology and confirm the diagnosis, though hoping against hope that a mistake had been made”.

“It finally struck home, this was actually happening to me. I was going to be getting my leg amputated. I wasn’t dreaming anymore,” says Chris.

That evening Chris and his parents met Sanjeev. “As a hockey player himself it was clear he was very moved by Chris’s plight, visibly upset to have to tell a member of his club’s first-grade team such bad news,” says Ronan.

A decision had to be made whether to have the operation in Australia or Ireland.

“The doctors explained to me how serious the tumour was, that it can spread rapidly. To me it was a no-brainer,” says Chris. “Sanjeev explained to me that he could fit me in on Wednesday morning for the operation.”

Five days of intermittent distraction followed – St Patrick’s Day with friends on Coogee Beach, the zoo with his mum and dad.

Wednesday, March 21st, 2012. A year to the day after leaving Dublin, Chris was on an operating table at RPA hospital in Sydney. He was 24 years old.

“Within 14 days of presenting to a medical professional, Chris had his condition diagnosed, confirmed, treatment planned and necessary action taken. Drastic and shocking as it was, so much better than if he had been at home in Ireland, I think,” says Ronan.

The disadvantage was that Chris had had little time to come to terms with it all.

Three weeks later, Chris was on a flight back to Dublin. But Australia had already cast its spell, and even a traumatic final few weeks in Sydney couldn’t put Chris off returning.

“Just because I had this major operation, I was determined I didn’t want it to alter my life. I was enjoying my job in recruitment and everything about Sydney so this wasn’t going to stop me. After the six weeks, I flew back to Sydney with my dad and I began rehab.

“A week or two back in Sydney and I was fitted with my first prosthetic and I was able to walk on my first day – albeit with the help of a handrail and limping heavily, but I was still able to walk.”

Within a few months, Chris was running on a treadmill and, six months after the operation, he played in an indoor hockey match, with the team he had helped win the same competition the year before.

He has given several talks with cancer fundraising group Cantoo in Sydney, and has been in touch with a talent scout for the paralympics. “Canoeing or athletics look like possibilities.”

And while Sydney University’s first team lost a player, they gained an assistant coach.

“People have no idea that I have a prosthetic leg when I first meet them. I walk around fine. On the plus side too, I get to skip long queues which definitely comes in handy at airports. And taking it off at parties gets a laugh out of people, the look of shock on people’s faces is brilliant.”

Two years on from having the rug pulled from under his feet, the slowdown for Chris has proven temporary.

“And the amazing support I got from friends and family helped me get through it with a positive attitude. When you get knocked down, you have to get right back up and that’s what I have tried to do.”