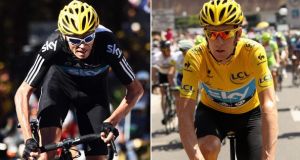 Chris Froome and Bradley Wiggins are among the latest batch of athletes to be targeted by Russian hackers. Photogrpah: Getty

Five British athletes, include the Tour de France winning cyclists Chris Froome and Bradley Wiggins, are among the latest batch of names alleged by a group of Russian hackersto have taken banned substances for which they had received a therapeutic use exemption (TUE).

Late on Wednesday night the cyber-espionage website Fancy Bears published documents it obtained from illegally hacking into the World Anti-Doping Agency’s database that also included 10 American athletes, among them the gold-medal winner shot putter Michelle Carter, as well as five Germans, a Russian and a Danish athlete.

On Tuesday it leaked the personal files of several top American athletes, including the tennis stars Serena and Venus Williams and the gymnast Simone Biles, and promised that it would soon publish “sensational proof” of famous athletes taking doping substances.

The latest batch of documents suggest that Froome had a TUE for prednisolone, which is used to treat a variety of inflammatory and autoimmune conditions, for five days in May 2013 at the Critérium du Dauphiné and seven days in April 2014 during the Tour of Romandie. The latter TUE has been widely reported but the 2013 Dauphiné, which Froome won, has not been. In both cases the TUE was approved by the International Cycling Union’s Mario Zorzoli. Wiggins, meanwhile, is claimed to have had a number of TUEs for salbutamol – a medication that opens up the medium and large airways in the lungs – dating back to June 2008, as well as the asthma medications formoterol and budesonide. Triamcinolone acetonide, given because of Wiggins’ lifelong allergy to pollen, was also approved by Zorzoli.

The British golfer Charley Hull was alleged to have been given a TUE for salbutamol while Heather Fisher, who has competed in both the bobsleigh and rugby union, had TUEs for the drugs methylprednisolone, triamcinolone and dexamethasone. The British Olympic rower Sam Townsend was also claimed to have been allowed a TUE for asthma medication.

There is no suggestion that any of the athletes named has done anything wrong but the documents will inevitably raise further questions about the use of such drugs and TUEs to improve sports performance in the coming days.

In response to the earlier Fancy Bears leak Wada admitted that the hackers had gained access to its Anti-Doping Administration and Management System (Adams) database via a phishing attack using an International Olympic Committee created account for the Rio 2016 Games. Its director general, Olivier Niggli, insisted he “deeply regretted” the violation and was “very conscious of the threat that it represents to athletes whose confidential information has been divulged through this criminal act”.