Catherine Noone backtracks on UFC comments 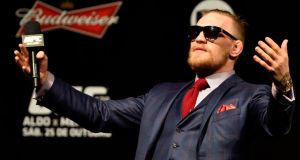 Fine Gael senator Catherine Noone has admitted she was wrong in calling for UFC to be banned from Ireland, and labelling it a “vile so-called sport.”

Speaking to Ryan Tubridy on 2fm, the former Dublin City council member had admitted to knowing relatively little about UFC, but claimed she knew enough to know it shouldn’t take place in Ireland.

Noone said: “I do think this stuff is awful. I’ve no claim to know the world’s end about this but I do know the basics.

“Some states in the USA have banned it and I don’t think it’s something that we should be giving a platform to in Ireland. It’s ultra violent and it tends to be very staged and it’s all about the money.

“I just think it’s hideous stuff and I don’t know why we should entertain it on our shores.”

However, Noone has subsequently tweeted to say she jumped the gun in regards to UFC, and that she had received numerous offers to be educated about the sport which she would take up.

When asked which American states had imposed a ban on UFC Noone said: “New York for a start, lots of them. New York is the main one which springs to mind. 30 something, but I’d be hesitant to say the exact states because I don’t have the list in front of me now.”

However, UFC isn’t banned in any American states, with New York being the last state with an athletics’ commission to agree to license the sport.

When asked if she had ever seen a UFC bout before Noone said: “I think I have. I do have some knowledge. I have read an excellent article by a person I know personally who has attended one of these and thinks it’s absolutely hideous.

“I’ve read up some more on it. The predominant thing I’ve learnt is it’s pretty violent, It’s very staged, the integrity of it all is at question in the sense that often the loser is agreed beforehand and it’s very much money driven, and very very violent.”

Ireland’s UFC start Conor McGregor’s next fight will be against Germany’s Dennis Siver on January 18th, and luckily for Senator Noone it will take place at Boston’s TD Gardens and not in Dublin.