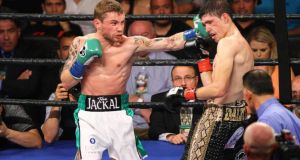 It is with plenty of justification that El Paso sells itself as America’s Sun City. The warm clear light of yesterday morning in west Texas will have brought some welcome relief for Carl Frampton. It might also have helped him view the previous day’s events more positively.

On Saturday afternoon at the Don Haskins Centre, Frampton had made his US debut a successful one . . . eventually. He won a unanimous decision against Mexican Alejandro González Jr and retained his IBF world title for the trip back to Belfast today.

But success had been preceded by a scare. An almighty one. In a chaotic first round, Frampton was downed twice by the impressive González with a left and then a right. For a fighter who had never touched the canvas in his professional or amateur career the shots were shuddering shocks to the system.

“I’m flying back on Monday and I’m going back with mixed emotions,” said Frampton after taking his undefeated record to 21 fights. “I’ll maybe cheer up in a day or two. I got the win which was the most important thing but it wasn’t the explosive performance I wanted. I set myself high standards. I’m disappointed but the TV guys around here seem to be very happy because it was exciting.

“I couldn’t get the [big punches] off, I couldn’t get them going. He surprised me. He was a lot better than I thought. But I came out here and I wanted to win impressively and I didn’t do that. But it was an exciting fight at least.”

Frampton was reluctant to offer excuses. When pushed, he did criticise the slow, sticky ring, which he felt had been set up for the double bill’s other headliner Julio César Chávez Jr. “The ring was just dead. I couldn’t move in there,” said Frampton after a night where his footwork and all subsequent movement were way off his razor-sharp best.

“It’s a Chavez ring, made for him to move forward. There’s an inch-and-a-half of foam under the ring. It was just ridiculous. I couldn’t get on my toes. I couldn’t move my legs. It was so soft. Obviously that played a part in the knockdowns”

For all the positives of the night – and there were many – there was just no getting away from those two knockdowns. Frampton and his support staff of McGuigans have set such soaring standards through his stellar career to date that any mistake is amplified.

Two glaring errors in a single round like those in Saturday’s opener were viewed as a very significant wake-up call. Coach Shane McGuigan was often scathing in his honesty afterwards.

“If you cut too much weight, you leave yourself in a position like that. He said to me he just didn’t feel himself and, you know what, this is what happens when you’re not in control. We will never, ever, ever let this happen again.

“We’re going to have to reassess everything and see about the weight because there are massive fights at featherweight. I don’t want him feeling vulnerable in the ring. If he feels vulnerable, then he will not fight at super-bantamweight.”

A move up to featherweight would put Frampton on a collision course with some huge names Stateside. Léo Santa Cruz was ringside here and was impressed with Frampton’s comeback.

But after Scott Quigg’s swift destruction of Kiko Martínez in Manchester on Saturday night, the clamour for that match-up to be made stirs again. The weight question lingered more than any other into the El Paso night.

“He hasn’t had that kind of trouble before,” said Barry McGuigan. “He’s big for that weight. It seemed like a bigger struggle this time than ever before. Maybe he’s grown out of the weight. He’s 28 years old so that could [be a natural move].

“It could have been all the water he was drinking. He was too heavy too late. The day before, he shouldn’t have been as heavy as he was. We then had to dry him out and that’s not good. It saps your energy, especially out here [in the heat].

“At the end of the day, it’s not a good day at the office but he got up off his arse and he boxed and showed his courage and his boxing brain. And, ultimately, his skill.”