‘We’ve got so much support ... but we’re letting ourselves and our supporters down at the moment’ 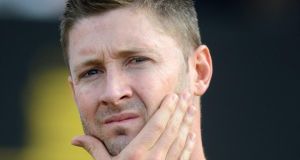 Australia’s captain Michael Clarke: ‘What can I say? Our performance in the first innings was unacceptable’. Photograph: Philip Brown/Reuters

Michael Clarke has admitted his Australia team have become a laughing stock and cannot have any complaints about it after an “unacceptable” batting performance in the first innings at Lord’s.

Clarke provoked some chortling in the crowd when he insisted to Sky’s Mike Atherton that Australia could win the remaining three Tests to regain the Ashes at the post-match presentation ceremony in front of the pavilion. “I heard a lot of the crowd laugh when I said that, and rightly so,” the captain reflected later.

“What can I say? Our performance in the first innings was unacceptable. Just about everyone in our top seven has made a 50 so far in the series which shows that the talent is there. We just didn’t have the discipline that England had – they were willing to bat for long periods and graft through the tough times.

Clarke accepted a large share of the responsibility for that collective failure after making 51, his highest score of the series and the third consecutive innings in which he has passed 20 without going on to the big score Australia needed. “I haven’t scored enough runs, it’s as simple as that. I’m as responsible, if not more accountable, for my poor performance in the first innings [when he was lbw to a Stuart Broad inswinger for 28]. My shot selection was extremely poor. I expect better from myself and this team needs me to make sure when I get a start like that I get a big score.”

He plans to play in the three-day tour match against Sussex that starts at Hove on Friday and said he had no knowledge of the selectors looking outside the squad for batting reinforcements – although David Warner is expected to rejoin the Ashes party in Brighton after playing a second game for Australia’s A-team this week.

England’s captain, Alastair Cook, confirmed that Kevin Pietersen is “a concern” for the third Test, which starts at Old Trafford on Thursday week, although he stressed his calf injury is “a slight strain and not a tear”.

He conceded that England’s batsmen had also had cause to be grateful to their bowlers over the course of the first two Tests. “Twice now we’ve been below par with the bat in the first innings but our bowlers have dug us out of a bit of a situation with some seriously skilful bowling.Certainly in this game to win by as big a margin as that is obviously a testament to the 11 guys who played for England. At the end of the first day it was probably even stevens. But from that moment we really upped our level with ball and bat.”

With England 2-0 up after as many Tests for the first time in decades against Australia, Cook became the first England captain for a long time to be asked whether an Ashes whitewash is a possibility. “It’s certainly too early for that,” he said. “You only have to look at our dressing room to see how hard we’ve had to work for these wins.”

But he did not entirely dismiss the possibility. “It’s a winning habit, isn’t it? We’ve won all four Test matches this summer [after the 2-0 victory over New Zealand] and that’s a good place to be. But we won’t be taking anything for granted or taking our foot off the gas. We won’t be looking past the first hour at Old Trafford – that’s how Andy Flower operates.”

Cook admitted that while Joe Root’s Test-best 180, which earned him the man of the match award ahead of Ian Bell and Graeme Swann, had not come as any great surprise, the two wickets he took in Australia’s second innings were an unexpected bonus. “Seven overs, two for nine was a little bit of a surprise, to be honest. He keeps moaning when I take him off but he’s only 22, so he can just bowl when he’s told.”Graeme Swann’s late dismissal of James Pattinson - and the decision of Marais Erasmus to give him out, later vindicated by replays although neither team had any reviews available - saved MCC the nightmare scenario of the game dribbling into a fifth day with a tiny amount of play remaining. That would have forced them to open up the ground, having sold all 28,000 tickets for the fifth day’s play for the first time, at a cost of around £500,000 – while still having to refund all ticket holders in full if there was less than 10 overs’ play.

As it is, ticket holders for Monday’s play will receive a full refund- unlike in the third Test at Old Trafford, where Lancashire have sold tickets for the fifth day at a discounted rate but are only offering tickets for alternative matches if the match is completed inside four.