Athletes a step ahead of testers in the war on doping 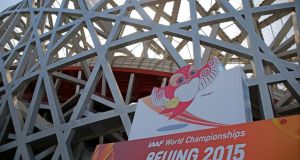 The IAAF World Championships begin in Beijing on Saturday with the issue of doping still plaguing athletics. Photograph: EPA

It feels almost quaint to recall that when Bob Beamon leapt 8.90m at the Mexico City Olympics in 1968 his only performance enhancer was a shot of tequila. When Beamon lifted, kicked and fluttered through the thin air – like a man furiously pedalling on an imaginary recumbent bicycle – millions on TV gasped. If there was a similarly stupendous performance at the world championships, which begin in Beijingon Saturday, audiences would probably be more likely to raise their eyebrows.

Yet for all the recent doping exposés, the battle between cheats and testers has not dramatically altered. Even with the establishment of the World Anti-Doping Agency in 2000, and the introduction of the Athlete Biological Passport in 2009, the percentage failing drugs tests remains stubbornly stuck at around 1-2% per year, even though athlete surveys tell us the number of dopers is probably somewhere between 14 and 39%.

Sometimes that is because suspicious tests do not quite reach the high burden of proof needed to be declared officially positive, as is reportedly the case with those unnamed athletes revealed by the Sunday Times to have abnormal blood values. Sometimes it is because testers are beaten by increasingly sophisticated methods or clever drugs. Victor Conte, the controversial supplement producer who was sent to jail for his role in the Balco scandal in 2003, believes it is still far too easy to get away with cheating. “Can athletes micro-dose with EPO and testosterone and get away with it? Yes, they can. Can they use insulin?” he asks. “Yes, they can. Can they use thyroid medication? Yes, they can. It’s like taking candy from a baby. That’s how easy it is for smart chemists and advisers to circumvent Wada testing.”

Conte is a controversial figure, with some suspicious of his past and others dismissing him as too bombastic. But it is true that, while anti-doping scientists have largely sussed out how to detect banned stimulants and diuretics, in other areas the war on doping rages on without a foreseeable end. As Paul Scott, the chief science officer of Korva Labs, a testing and research laboratory focused on anti-doping, admits: “Drug testing has a public reputation that far exceeds its capabilities.”

The fiercest skirmishes are fought over two areas. First, androgenic agents, such as anabolic steroids, which make the body stronger. Second, peptide hormones such as EPO, which improves the body’s red blood cell count and thus endurance, and human growth hormone, which builds muscle. This isn’t new but as Scott explains, a key difference is that athletes now realise that small doses of steroids or EPO substance are nearly as effective – and much harder to detect. “Sophisticated dopers have come to understand how to work around the Athlete Biological Passport,” he warns. “They have evaluated correctly that they need to pare back taking steroids or EPO and they will still get most of the benefits.”

Dr Michael Joyner, an expert in human performance at the Mayo Clinic, says that the method of delivering drugs has changed too. “In old days when people were taking synthetic steroids they took them by mouth,” he says. “But they get out of your intestinal tract and into the liver and make all sorts of metabolites that have these very long footprints which are easy to detect. So then people switched to plant-based testosterone administered in ways that bypass the liver, such as using patches and gels, and they are micro-dosing by using short-acting compounds.”

Those compounds are usually out of the system too quickly for the standard T/E test, which measures the relationship between testosterone and epitestosterone, to be effective. Only when an athlete is regarded as especially suspicious is the more comprehensive carbon isotape ratio test used as a first screen. The CIR test, which extends the detection period for fast-acting testosterone gels and creams from a few hours to several days, costs $400 and takes 2.5 days to complete, so is far more costly and time-consuming than the T/E test. But as Conte puts it: “If they had used CIR tests, which came in 1994, there would have never been a seven-times Tour de France champion called Lance Armstrong. ”

Increasingly one hears about athletes micro-dosing testosterone to recover from extremely tough workouts quicker, which might mean that they can complete an extra speed session over a fortnight compared with their rivals, which could make all the difference at a major championship. As Joyner points out: “What people often forget is that if you win a 10,000m race by 0.5% you win it by 50m. That’s an outrageous margin. Athletes are not looking for ludicrous edges. Often athletes top up with hormones or bloods when they are depleted as a result of hard training or competition. So we have moved away from an industrial-strength doping model to a much more subtle and difficult to detect one.”

And while the Athlete Blood Passport is widely accepted to have reduced industrial-sized blood doping, both Joyner and Scott fear that athletes have learned how to beat it by microdosing EPO while training at altitude, which may give a harder to understand picture for testers. As Joyner puts it: “The ABP is an improvement. But is it foolproof? No way.” Scott says it is “simply not sensitive enough to capture most doping”. He believes testers need to start looking at the type and age of the reticulocyte – the immature red blood cells – to add more sensitivity into the biological passport.

Conte also warns that athletes are using IGF-1 LR3 – a souped-up growth hormone which is currently not detectable. “They are using this on the day of competition and testing negative,” he warns. Scott agrees but says there is a solution. “Wada has spent millions of dollars on a really bad test that wasn’t very good for growth hormone and it wasn’t detecting IGF1 use at all. But there is a biomarker system, which goes into a formula along with your sex and age, that works and Wada is only starting to implement.”

Meanwhile Conte points out that another controversial substance – thyroid medication or T3 – which is still legal despite the UK Anti-Doping Agency calling for it to be banned is also being abused. “We called it lightness and the reason was because the athletes felt really light when they took 50 micrograms of T3,” he says. “I believe it is performance enhancing. It certainly accelerates your metabolism. And thyroid medication also boosts the effects of micro-dosing testosterone.”

But ban that drug and something else will surely come along quick enough, as sure as night follows day. As Joyner warns, there are almost certainly novel compounds from underground chemists being developed. “I would be absolutely shocked if there wasn’t a Patrick Arnold 2.0 [the chemist who designed Conte’s steroids] out there, working on other ways to beat the system,” he says. “It’s amazing what you can do with a masters degree in organic chemistry and equipment you can get off eBay or Craigslist for around $1,000.”

But it is not just the pharmacology that is the problem. It is politics and corruption too. One hears of countries where certain coaches are told when the anti-doping agencies are going to test their group and others where the testing is so slack that athletes know they will never get tested. The decision to change the rules so an athlete has to miss three tests in 12 months before they are banned, not three in 18 as before, hardly sends a tough message on doping either.

And while it is not easy for Wada, given its budget to police doping in global sport (around $30m) is less than Stoke City’s for a Premier League season, some feel more could be done by all sporting bodies engaged in the fight on doping. “Much of what is promoted by the authorities is propaganda,” warns Conte. “They might want to scare you, they might want to deter you. But the reality is they are not doing enough.”