Home side beat Australia by eight wickets in the third Test, they now lead the series 2-1 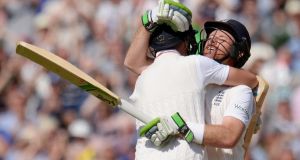 Hammered at Lord’s after an impressive opening win at Cardiff, England turned the tables in equally decisive fashion to win by eight wickets inside three days at Edgbaston.

Warwickshire batsman Bell made 53 and an unbeaten 65 on his home ground as he and Joe Root rounded off a chase of just 121.

But he was quick to share the credit round after James Anderson took six wickets in the first innings and Steven Finn did likewise in the second.

“It was a tough week after Lord’s, Australia showed after Cardiff the way to bounce back and we’ve done that.

“The bowlers set the tone on day one, it’s been a great week for us but there’s a lot of hard work for next week as well.

“I’ve been part of a few of these series and it’s always tough. I fully expected today Australia were going to fight all the way — I never expected to be chasing 50, I was expecting 150-plus.”

Bell’s runs were particularly welcome given the pre-match scrutiny on his place, coupled with a move up to number three in a revised top order.

He said: “With how I got out in the first innings — Geoffrey Boycott told me this morning how bad a shot that was! — so I wanted to be there at the end.

“I hope that’s the start of me getting back in form.”