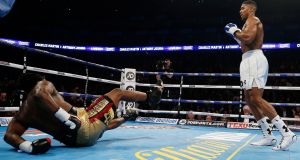 Charles Martin is knocked down by Anthony Joshua in their IBF World Heavyweight Title fight at the O2 in London. Photo: Reuters

Anthony Joshua blew the world heavyweight scene wide open on Saturday night when he joined Tyson Fury as a British world champion – and David Haye, another contender, was a fascinated spectator as his fellow Londoner destroyed the American Charles Martin inside two rounds.

British aspirants and claimants are now queueing up for whatever bauble the TV stations, casinos and sponsors can sell as credible crowns in a heavyweight picture that has taken on the crazy and crowded appearance of an Hieronymus Bosch painting.

It was an emphatic, flawless statement from Joshua, the super-heavyweight Olympic gold medallist of 2012 cementing his professional credentials when many said he had been rushed into this challenge for the IBF title way too soon. In fact, it was the belt holder whose keen acceptance of the money on offer – rather than choosing a less lucrative but easier option elsewhere – that aroused the more meaningful speculation that he was cashing in while he could. And so it panned out.

“I ain’t gonna get too carried away,” Joshua said of his 16th straight stoppage win from as many fights. But there are others who will do it for him, including his promoter, Eddie Hearn, who was understandably quick to claim him as a global sporting superstar.

“Every fight gets better and better,” the new champion said. “It’s not just about power. It’s about speed and precision. [MARTIN]was big and brave enough to bring his title to the UK. Respect to him.”

With combined firepower of knockouts that had rendered 94% of their 39 opponents sickened or horizontal, each fighter knew that the Belgian referee, Jean-Pierre van Imschoot, would need only to stand over the supine loser and count.

Martin, unbeaten in 24 contests, had no reliable evidence that his chin was up to the task and his reluctance to find out gave Joshua all the space and time he needed to methodically go to work from the opening bell. The American’s legs betrayed him when he found himself on the end of a crunching, long right, and two nuclear right hands put the bemused champion over in round two. The job was done in four minutes and 52 seconds, and history called loudly.

Joshua, we are led to believe, has booked a date for a unification showdown with Fury – perhaps in his next outing, maybe by the end of the year – but there are no guarantees in this business. Hearn even suggested he would stage Joshua’s first defence on the same night – and doubts if Fury-Klitschko will even go ahead.

Adding texture, to the tapestry is Haye, who has his second comeback fight next month. As odd as it will look, three British heavyweights could lay varying claims to be regarded as the best heavyweight in the world over the next year.

There was a similar period in the late 90s, when Lennox Lewis and Herbie Hide ruled different kingdoms simultaneously, the former more commandingly than the latter, and Henry Akinwande briefly held a crown.

Fury, plainly, has the best claim to legitimacy after dethroning Wladimir Klitschko last November – and, providing he wins the rematch in Manchester on 9 July – no given – he seems genuine in his desire to fight Joshua. A second win over the Ukrainian should at least keep him in the gym until September.

If that unification fight cannot be made this year – and it will take more than a press release by the Mancunian’s connections to seal the deal – Joshua could continue his education over the next year or so against a selection of triers in the IBF top 10 who are better than some of the opponents he has already dispatched, but not exactly big draws.

Whether Sky subscribers would be prepared to pay extra on Box Office to watch fighters such as the 33-year-old Turkish German Erkan Teper, the 35-year-old Cameroonian Carlos Takam or seasoned campaigners Kubrat Pulev and Dereck Chisora, might come down to smart marketing.

This is not a cauldron of danger – which is why Hearn was prepared to gamble on winning the IBF title. It is a calculated part of a longer journey.

Eventually, Hearn might have to steer his cash cow towards the promising New Zealander Joshua Parker, who is scheduled to fight Takam in an eliminator next month – do a deal with the Furys or go outside the IBF, and that always gets messy.

David Allen, an unbeaten Yorkshire heavyweight who calls himself the White Rhino, knows this boxing journey from a different perspective. He tweeted on Saturday morning: “3 years ago today I was sparring joshua, today he becomes world champion while I eat crisps in a single bed.” It’s the most eloquent description of the business since Frank Bruno observed many years ago that professional boxing was “showbusiness with blood” – of which there was a fair quotient earlier in the evening.

In the final moments of their middleweight 12-rounder, Matthew Macklin and Brian Rose, veteran warriors who had both fallen short at world level, fought as if they might not be doing this in public for much longer. A contest that had been close, clever and bruising went the way of the 33-year-old Macklin, by 113-113 and two cards of 115-111, to give him the vacant IBF Inter-Continental belt – and a sliver of encouragement to continue in a sport that has become increasingly arduous for the Irish Brummie. “I’ll have a think about it,” he said.

On a bill brimming with belts of various worth, Jamie McDonnell secured his WBA bantamweight title for the fourth time by stopping Fernando Vargas in the ninth after nearly half an hour of one-way traffic. The Mexican did well to get that far; the bigger mystery was how he arrived here in the first place, having lost four of his past 10 fights. Still, the champion got the job done and now looks to a unification fight with either Bristol’s Lee Haskins or the Japanese Shinsuke Yamanaka.

Haskins’s stablemate Lee Selby ran on to a peach of a left-hook counter from slick Eric Hunter in the second round that dumped him on the seat of his pants, but recovered his composure to retain his IBF featherweight title by 115-111 and two scores of 116-110.

The 29-year-old Philadelphian calls himself the Outlaw and two of his three losses had come by disqualification. He has abundant skill and a good chin but a short fuse, and the referee, Marcus McDonnell, warned him repeatedly for hitting low, finally deducting a point in the eighth.

Conor Benn, with the moniker the Destroyer, threw punches with all the intensity of his father, Nigel, to blow away the rather feeble challenge of the imported Bulgarian Ivailo Boyanov inside a round to win his first professional fight. The teenage light-welter was warmly received, and hugged several times by the original Dark Destroyer.

The first big right George Groves landed rocked the unbeaten Scot David Brophy to his boots in round one; the final one, to the body, put him down in centre ring in round four. Three times a world title challenger, three times a loser, Groves needed a statement win to put himself back into an increasingly exciting super-middleweight scene.