Only one athlete per country can compete at August event 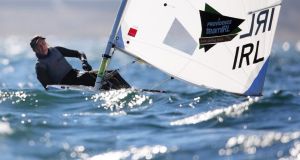 Annalise Murphy: may face the prospect of a trial even though she won a Laser Radial nation place at last year’s ISAF World Cup in Spain. Photograph: Cathal Noonan/Inpho

Irish sailing will get its first Olympic trial of the 2016 quadrennial this summer as places for Aquece Rio, the second of two Rio 2016 test events on Olympic waters come up for grabs. While the ink is still drying on the small print of an Irish selection document there is confirmation that Irish Laser helms will be subject to a first past the post trial based around at least one European regatta.

Only one athlete per country can be represented at the August 18th event which means competition for places in two of Ireland’s four supported Olympic dinghy classes.

Annalise Murphy, who finished fourth in the Weymouth Olympic regatta three years ago, may face the prospect of a trial even though she won a Laser Radial nation place at last year’s ISAF World Cup in Spain. Likewise London 2012’s James Espey who also won a nation slot in Santander looks certain to be in a mens Laser battle at least with Finn Lynch who has declared for 2016.

The Rio event will take place at the Marina da Glória, Rio de Janeiro, Brazil and will feature 380 athletes competing across ten classes in a dress rehearsal of the Olympic regatta itself.

In Ireland’s two other supported classes, namely the mens and women’s skiff, there are no rivals and thus no trials but with Andrea Brewster and Saskia Tidey still chasing a nation place in the 49erfx there is a question mark over their attendance in Brazil at all this summer.

Instead the Royal Irish Yacht Club pair may prioritise an Argentinian world championships, where the last remaining nation places are on offer, ahead of the opportunity to practice on the Olympic waters.

The 49er mens duo of Ryan Seaton and Matt McGovern are expected to compete at Aquece Rio.

Each ISAF Member National Authority is entitled to enter one boat in each Olympic event and must apply to enter by May 1st 2015.

UCD defends its Irish University Sailing title in West Cork this morning as 28 teams from nine colleges, including hosts U CC – last year’s runners-up – contest the varsity title in Schull. The Scottish University Sailing Association is also racing with two teams. Each of the three boat team has been divided into Gold, Silver and Bronze fleets after yesterday’s opening rounds with top teams competing in tomorrow’s finals.

The Dún Laoghaire Flying Fifteen class, based at the National Yacht Club, has signed up a fleet sponsor for the 2015 season. Mitsubishi motors will sponsor the 25-boat fleet and its national championships to be hosted by the Dublin Bay club in September.

Also on the bay, the 2015 season will see some new dedicated dinghy classes racing under the Dublin Bay Sailing Club (DBSC) burgee.

The Laser dinghy is to get its own Tuesday night start as are the RS200 and 400 classes. It’s a new initiative by the club to see if the popular winter format where up to 40 Lasers are currently contesting the DMYC frostbites can be repeated in the summer.