Angling Notes: Anglers invited to contribute to review on national policy on bass, pike and trout 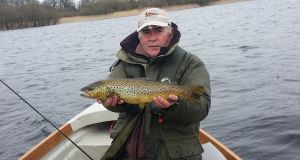 Armagh angler David Connor with one of his Sheelin catches 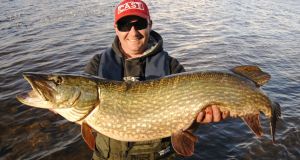 Frank Gilligan, from Brisbane, with his 11kg pike on Derravaragh 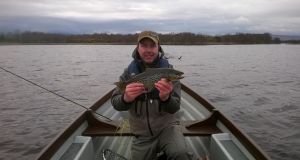 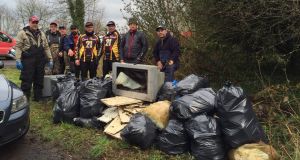 A review of the national policy to examine all relevant data for the management of bass, pike and trout is underway by Inland Fisheries Ireland (IFI). Initiated in January, the process will include examination of current stock, marketing and scientific information.

An important element of each review will be a public consultation process to be announced later this year. The consultations will ensure that anglers and stakeholders have time to consider existing policies and make submissions.

During a recent anglers’ demonstration at IFI headquarters, a petition was handed in signed by more than 22,000 people from around the world, including 1,032 Irish signatures. A group of about 80 anglers protested against the current pike policy, agreed with the Irish Federation of Pike Angling Clubs and National Association of Recreational Anglers in 2014.

Commenting on this, Dr Byrne added: “While the petition represents a small proportion of Irish anglers, IFI recognise the unified views of those who signed it and we have made contact with the protest organisers with a view to engaging with this diverse group of anglers.

Meanwhile, the fisheries board has announced the allocation of €50,000 to the Midlands Fisheries Fund (MFF), a scheme set up to support fishery development projects in the midland fisheries group area.

The scheme was created in 2013 and is funded through angler contributions set aside from the permit income. For 2016, the board has allocated an additional €10,000 to individuals and businesses for product development and market angling in the MFF permit area.

Applications are invited to support projects which seek to increase accessibility to fisheries, develop and install fishing stands, tackle terrestrial invasive species and to provide funding to angling activities in the midlands.

Closing date for applications is May 20th, 2016. Full details and application form available at: fisheriesireland.ie/Angling-Information/midland-fisheries-fund.html.

Fine for illegal fishing on Shannon

At a recent sitting of Killaloe District Court, Judge Patrick Durkan convicted a man of illegal fishing on the River Shannon at O’Brien’s Bridge in August 2015. The man was found guilty of illegally fishing with prawns and fined €750 and costs amounting to €1,025.

Salmon fishing on the Shannon is permitted below O’Brien’s Bridge to Thomond Bridge under a local catch and release byelaw. Wild salmon must be returned immediately and use of prawns is prohibited under byelaw in the entire Shannon catchment.

In summarising his judgment, Judge Durkan said fisheries were the greatest resource of this country and that fishery officers must be allowed to protect them.

Fishing was slow on Sheelin despite a steady flow of anglers each day, according to Brenda Montgomery. There were good hatches of small black buzzer and some fish showing when the wind dropped.

The club reflected a deep environmental respect for the lake and its surrounds with participants spending two hours picking up and bagging mountains of rubbish dumped over previous months at Sailors Garden. More than 30 bin bags along with broken television sets, mattresses and other domestic paraphernalia were stacked high ready for collection by Westmeath County Council.

Ronan Cusack reports excellent fishing again on Lough Mask. “The car park in Cushlough was a hive of activity on Sunday morning with anglers scrambling to get out fishing. Unfortunately by 3pm the shore-line was deserted, as an icy east wind swept across the lake,” he said.

Despite the low temperatures, fly hatches improved dramatically and large hatches of small sedge, duckfly and the odd olive have been sighted and trout are taking full advantage.

Denis Kelleher had three nice trout on Sunday on wet-flies in among the rocks (best 1kg). Eddie Gibbons and Simon Hughes, from Tourmakeady, had four for a few hours fishing (best 1kg, all returned).

On Corrib in the Cornamona area, a Swiss group enjoyed excellent fishing wet-fly and trolling with one saying it was the best fishing they had there in many years.

In the Oughterard area Basil Shields reports duckfly hatches tapering off in the lull period between duckfly and olives. David Irwin, from Co Down, had excellent fishing, catching eight trout over two days on buzzer and all released (best 1.5kg).

All quiet on Melvin due to poor conditions

Lough Melvin was quiet with few rods out due in great part to the blustery weather. Trout fishing was good for those who managed to brave the conditions. Two rods fishing Kinlough Bay in strong winds and snow flurries on Sunday reported good numbers of quality Sonaghan trout.

Lough Swilly will celebrate its 50th anniversary sea angling festival at Rathmullan on weekend of June 4th/5th, 2016. For booking details, contact Angela on 087-2480132 or rathmullancharters@eircom.net.