Angling: Invasion of Asian clam a threat to fisheries and native species

Closure of Shannon to fishing at Lanesborough an indication of threat 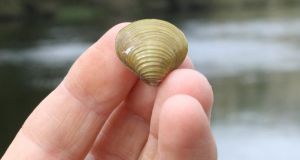 The Asian clam: each can produce up to 70,000 juveniles a year 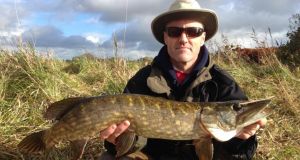 Following the findings of a survey into the population of Asian clam (corbicula fluminea) at Lanesborough, Co Longford, and the surrounding area, fishing is to remain closed until further notice from Inland Fisheries Ireland (IFI).

Last month, a large population of the invasive species was located in the Shannon, below the hot water discharge from the ESB station at Lanesborough. As a follow-up to this dramatic find, IFI has temporarily closed the section for angling and erected signage.

While an enormous amount of work has already taken place on eradication, it is clear from the survey that the Asian clam population has reached a stage where complete removal is not feasible.

The relevant agencies have been briefed including the National Parks and Wildlife Service, Waterways Ireland, ESB, Bord na Móna, the Office of Public Works, Roscommon and Longford county councils, local community and angling groups, and management action will be considered in the coming weeks.

This bivalve mollusc is one of the most notorious aquatic invasive species and was first recorded in Ireland in the river Barrow, near St Mullins, Co Carlow, in April 2010. Subsequent studies revealed it was firmly established in the lower Barrow and Nore, downstream of Inistioge.

In one section of the Barrow it achieved a density of 10,000 per sq m. Considering each clam can produce up to 70,000 juveniles each year, the potential for expansion is enormous.

Its introduction to waterways represents a major threat to Ireland’s habitats, native species and internationally- renowned fisheries. The ecology of watercourses can become dramatically altered and unsuitable for water-based recreational pursuits.

Infestations also have the potential to clog up brown trout and Atlantic salmon spawning grounds.

In order to limit further spread of the species, IFI is urging all anglers and boaters to implement strict biosecurity measures by disinfecting equipment when moving from one area to another.

Four disinfection stations have been purchased for both sides of the road bridge at Lanesborough and Ballyleague. One of the stations is located adjacent to the slipway at Lanesborough for use by boating anglers.

Dr Joe Caffrey, senior scientist with IFI, said: “It is imperative that every effort is made to limit the spread of this highly adept invasive species outside of its current range.”

Natural Resources Wales (NRW) is creating 11 settlement ponds in streams that feed into the Eden to act as a natural filter for nutrients, pollutants and sediment before they reach the river.

Elain Gwilym, project officer at NRW, said: “This work will help redress the balance on the Eden and improve the habitat of this critically endangered species.” Fifth- and sixth-class students from St John’s national school, Longford, were declared this year’s winners of the Something Fishy competition at a prize-giving ceremony in Carrick-on-Shannon education centre last week.

The primary school was awarded for Angling at One, their interpretation of an RTÉ programme, which featured quiz shows, music, dance, art and cooking, all related to rod and line fishing.

Accepting the perpetual trophy from MEP Marian Harkin, principal Joanne Bowers, said: “I would like to thank the IFI staff who supported the delivery of the programme, including field trips which made the subject of conservation of rivers and lakes come to life for the students.” For more information, see fisheriesireland.ie.