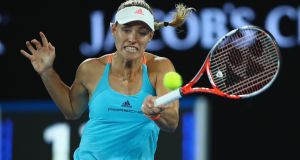 Angelique Kerber plays a forehand in her fourth-round match against Coco Vandeweghe. The German was defeated 6-2 6-3. Photograph: Clive Brunskill/Getty Images

A fourth-round elimination by an unfancied player was a disappointing end to Angelique Kerber’s defence of her Australian Open title on Sunday but the top-seeded German had never appeared comfortable in her skin at Melbourne Park.

It was a far cry from the magical night 12 months before, when Kerber rose up like a blonde Valkyrie to fell Serena Williams in a three-set classic, clinching a maiden grand slam title that set a platform for the brilliant season to come.

Kerber proved it was no fluke when she grabbed her second major title at the US Open, swiping the world number one ranking from Williams in the process.

The German arrived at Melbourne Park exalting in the memories, cradling the winner’s trophy like a baby to the draw ceremony.

But behind it all was a lean run after Flushing Meadows, a shock defeat to Dominika Cibulkova in the WTA Finals decider and a poor preparation at lead-up tournaments in Australia.

Heavy lies the crown, and the world number one ranking appeared to weigh on Kerber as she battled nerves and meltdowns in her opening matches at Melbourne Park.

She had an easier time of it against third-round opponent Kristyna Pliskova but it was to prove a false dawn as she was off from the first point against Vandeweghe.

“It was a tough match, and of course I’m disappointed. But I was not feeling the ball at all tonight,” said the 29-year-old Kerber.

“My preparation was like I wanted and everything was fine. I came here to play good tennis, playing round by round, trying to continue my run from last year.

“But this is tennis, and you have good days and bad days. For sure today was not my best day.”

Kerber’s elimination adds to a round of shocks at Melbourne Park so far, with the men’s two top seeds, Andy Murray and Novak Djokovic, also sent packing.

Williams, the 22-time grand slam champion, can take the number one ranking back by the end of the tournament, leaving Kerber’s hopes of building a dynasty in ruins.

“I think I have to a little bit think about everything what’s happened like the last few weeks, what I can take to the next tournaments with all the experience from the tournaments I played here in Australia,” she said.

“I will try my best to, yeah, of course, come back stronger.”