Andy Murray’s performance a victory for the women behind him 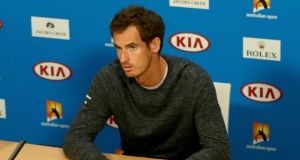 Andy Murray speaks at a press conference at the 2015 Australian Open. After winning his semi-final match Murray spoke out against those who had criticised his decision to hire Amélie Mauresmo as a coach. Photograph: Clive Brunskill/Getty Images

After Murray reached the final of the Australian Open on Thursday, he had words for anyone critical of his coaching relationship with Amélie Mauresmo, former world number one and previous Australian Open and Wimbledon winner.

“A lot of people criticised me working with her and I think so far this week we have shown that women can be very good coaches as well.”

Mauresmo, whom Murray appointed as coach in June 2014, is unlikely to be moved by such brickbats. Her charge is in the Open final, where he will take on Serbia’s Novak Djokovic. Job done.

Mauresmo had been criticised for Murray’s lack of success last year, which he put down to his back injury. But Murray was having none of it.

After his win against Tomas Berdych to reach the Australian Open final, Murray said the hard work was paying off and his coach had done a good job - regardless of gender.

Murray said he was grateful to Mauresmo for taking up his challenge to coach him. “I think that was a brave choice from her to do it and hopefully I can re-pay her in a few days.”

Of course, Murray is no stranger to spending time with powerful women.

His long-term girlfriend Kim Sears may paint pets for a living, but she was also able to paint the air blue during his semi-final with Berdych on Thursday night. She is as staunch in her support for Murray as he was in his support for a “Yes” vote in the Scottish independence ballot.

And then there is his mother, Judy.

Always there at courtside, except when his brother Jamie is playing doubles at the same time. Judy is also captain of Britain’s Fed Cup team.

Judy Murray has been outspoken about sexism in sport.

“I think we’re pretty much outnumbered about 10 to 1 male coaches to female coaches on the performance side of the game and it’s something I’d very much like to try to rectify . . . another part of my role beyond the Fed Cup is to try to help develop a female coaching workforce,” she said shortly after her appointment.

Murray continues to give nothing away. He just wants to win.

“It made such big news when Andy picked Amélie, but to me it was like, ‘Really? I just don’t understand that line of thinking,’” said Navratilova.

Murray doesn’t seem to understand it either.

Andy Murray plays Novak Djokovic in the final of the Australian Open on Sunday, February 1st