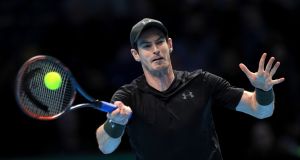 Andy Murray during his match with Stan Wawrinka in the Barclays ATP World Tour Finals at The O2, London. Photograph: Adam Davy/PA

Andy Murray defeated Stan Wawrinka to surge through to the semi-finals of the ATP World Tour Finals, closer to a showdown with Novak Djokovic.

After winning his opening two matches against Marin Cilic and Kei Nishikori, the Scot knew a set against Wawrinka would be enough.

He went one better, clinching a 6-4 6-2 victory to set up a rematch of the Wimbledon final against Milos Raonic on Saturday.

Should Murray come through that, and Djokovic defeat Nishikori in the other semi-final, then Sunday’s final would also be a straight shoot-out for world number one.

It was also a 22nd consecutive victory for Murray, equalling his career-best streak from this summer, which included titles at Queen’s and Wimbledon and Olympic gold.

The Scot said: “The first set was tight, there weren’t many chances either way. I just managed to get the break. In the second set, I’d already qualified, Stan obviously needed to win so it was a bit easier for me to play more freely than him.

“I played a very solid match and obviously I’m very happy to be through to the semis.”

Murray beat Raonic in the final of both Wimbledon and Queen’s, and said of another meeting: “I think he’s played very well so far in this event. It will be tough, he’s got a huge serve. Obviously I’m looking forward to playing him. It’s an amazing stadium, an amazing atmosphere.”

Although the table was in Murray’s favour, the danger was real and present.

Playing a match knowing victory is not essential is a strange scenario for sportsmen who rarely play anything other than knockout tennis, while Murray had three hours and 20 minutes in his already weary legs from Wednesday’s epic clash with Nishikori.

Wawrinka, meanwhile, proved once again with his US Open final victory over Djokovic that he is a man who knows how to rise to the big occasion.

Remarkably, all his three wins over world number ones have come in grand slam finals, with the Swiss now 0-20 in other matches.

Murray won their most recent clash in the semi-finals of the French Open but had lost the three previous ones, including at the same stage here last year.

Wawrinka bounced back from an awful performance against Nishikori to beat Cilic impressively and showed his full arsenal in the early stages.

Swiss fans, such a feature of Roger Federer’s success at the O2 over the years, were out in force cheering on their other man.

Murray had to hang on amid a barrage of winners and did it superbly, and he was right there when Wawrinka began to make errors.

The Scot broke serve for the first time at 4-3 and then forced three set points on the Wawrinka serve two games later.

But the 31-year-old held firm, forcing Murray to serve it out. In previous years, he might well have faltered but the confidence from winning so many matches has unquestionably helped him at such moments.

After claiming a tense point at 0-15, Murray was flawless and made sure the first box was ticked.

Wawrinka knew losing a set made it highly unlikely he would qualify for the semi-finals and the Swiss star’s shoulders drooped a little further when he dropped serve again to start the second set.

At 3-0 and two breaks down, Wawrinka broke his racket clean in half in frustration, adding a fine to his troubles.

But his main concerns were on court, and he could find no way to change the course of the match, shanking a final forehand into the crowd as Murray clinched victory.