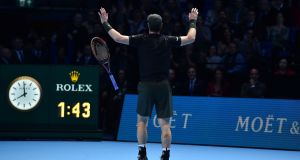 Andy Murray stood proudly on top of the tennis world after beating Novak Djokovic to win the ATP World Tour Finals and clinch the year-end world number one ranking.

It has undoubtedly been the finest season of Murray’s career but it would have had a bitter ending had he not walked away with the trophy at London’s O2 Arena.

Instead, he defied the tiredness he must have felt to stamp his authority on proceedings against the man who he overhauled two weeks ago and win 6-3 6-4.

It extended Murray’s winning run to 24 matches, earned him a fifth straight title and a cheque for nearly £2million.

This was the first time the number one ranking had been decided on the final match of the season and it was hard to disagree when Djokovic described the contest as one of the biggest they will ever play.

Their 34 previous meetings, of which Djokovic had won 24, had included seven grand slam finals but this was a uniquely tense occasion.

What would have been a 50/50 contest appeared to have swung decisively Djokovic’s way when Murray was detained for three hours and 38 minutes by Milos Raonic in Saturday’s semi-finals.

The Serbian, meanwhile, needed little more than an hour to swat aside Kei Nishikori, who was still feeling the effects of his own three-hour clash with Murray on Wednesday.

Sheer willpower cannot put a spring back in muscles clogged up with lactate or freshen up a mind frazzled by the demands of an 11-month season.

Murray’s previous victories against Djokovic had come when he successfully trod the fine line between aggression and patience.

But even in the first set of his clash with Raonic he was half a step slow and struggling to push up into his forehand.

Djokovic, meanwhile, jogged to the net after what amounted to no more than a light workout against Nishikori.

He may have arrived in London with the weight of the world on his shoulders but a venue that has brought him so much success had this time helped him restore form and confidence.

However, this was by far his biggest test of the week, and it did not take long for the problems of the last few months to come seeping back.

Djokovic’s groundstrokes lacked their usual authority and he was missing routine shots — not least a smash from on top of the net that he drove way long.

That came in a lengthy sixth game in which Murray held two break points.

Djokovic held on that time but Murray was given another chance two games later and took it, drilling a forehand into the corner.

The Scot was treading the line perfectly, going for his shots, particularly on the forehand, but not giving away free points.

He was leaving that to Djokovic, who netted another backhand on set point and then dropped serve again to start the second set.

Murray had never beaten the man he first played in junior tennis nearly 20 years ago from a set down, losing all 19 matches, so the early advantage was crucial.

There appeared no way back when a lacklustre Djokovic was broken again to trail 4-1 but an immediate re-break set home nerves jangling just a little.

Murray, though, quelled the butterflies and, amid a patriotic din, took his third match point when Djokovic drove a final forehand wide.