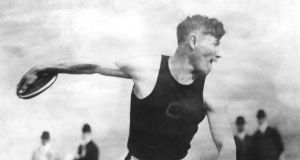 At the junction of Joe Boyle Circle and Route 903, three flags stand silent sentry over the tomb of Jim Thorpe. On each side of a rectangular mausoleum hewn from 20 tonnes of russet granite, images echoing the cadences of his life are carved.

Amid the poses of an athlete jumping, hurdling, running and throwing the discus, there is a baseball player, an American footballer and a Sac and Fox Indian, replete with feathered headdress, astride a horse.

Beneath them runs the legend, “Sir, you are the greatest athlete in the world” – King Gustav V, Stockholm, Sweden, 1912 Olympics.

This rustic corner of north-east Pennsylvania is the final resting place of Jim Thorpe, gold medal winner in the decathlon and pentathlon, outfielder for the New York Giants that lost the 1917 World Series, and storied contributor to what is now the National Football League.

The monument that hints at the range of his sporting prowess can never capture the tumult of his existence.

His response to the Swedish monarch’s sweeping encomium had been a simple and charming: “Thanks, King”, but six months later it emerged Thorpe had flouted the Olympic amateur ideal and he was stripped of his medals. It took his family until 1982 to have his good name and his golds restored and, by then, 29 years had elapsed since their father’s passing.

He died in alcoholic penury in a California trailer park, having once sold the movie rights to his story to Hollywood for just $1500 so Burt Lancaster could star as Jim Thorpe: All-American. The strange tale of how he subsequently made a posthumous 2500-mile cross-country trek to his highway crypt in a town he never visited but which today bears his name, begat a saga that reached all the way to the Supreme Court.

The grievance of the surviving Thorpe sons is spiritual and long-standing. Back in 1953, as the Sac and Fox elders mustered in a canvas hut near his birthplace in Oklahoma to perform the three-day long tribal rituals over the still-fresh corpse, his third wife Patricia Askew arrived on the scene.

Flanked by police, she took the coffin and began the quest for what she regarded as a more fitting burial ground than among his ancestors (his lineage included the great Chief Black Hawk on one side and an Irish grandfather who married a Native American woman on the other).

When the Associated Press held a vote in 1950 to establish the athlete of the half-century, Thorpe polled nearly twice as heavily as his nearest challengers, Babe Ruth and Jack Dempsey. In the pantheon, this is the kind of company he keeps. So, his widow figured his burial plot was something somebody somewhere was going to be willing to pay to host. Askew eventually sold his remains to the neighbouring Pennsylvanian communities of Mauch Chunk and East Mauch Chunk for cash, and an assurance that they would commemorate him suitably.

Accounts vary about how much she made from the transaction (figures range from $500 to $1500) but the towns amalgamated, rechristened their new, enlarged conurbation Jim Thorpe, and hoped their investment in a famous cadaver and a resonant name would prove a tourist attraction. It didn’t.

People who go there today are drawn by the proximity to the mountains, the rivers and the lure of outdoor sports. Most visitors don’t even know that the greatest athlete of his age is buried out on one of the approach roads.

Through the decades some of Thorpe’s children came to terms with this bizarre coda to his epic life. However, his plight has always rankled with his sons and the tribe. They believe his soul is doomed to wander, this spiritual dislocation from his people one more metaphor for his troubled life.

In 2010, they began a legal battle to have his remains repatriated so he might finally be buried, attended by the appropriate obsequies, back on the reservation. After an initial success, the Court of Appeals ruled he should stay where he is and then the Supreme Court refused to hear the case altogether.

For the octogenarian Thorpe brothers and the Sac and Fox, the injustice is typical of the way Native Americans have been treated by the American establishment down through history.

Despite the fact legislation was passed specifically ordering that Indian remains plundered for spurious research and to populate museums be returned to their tribes, the commercial contract signed by Thorpe’s wife carried more weight than generations of tradition, burial rites and customs. Unbowed, they continue to search other avenues to bring him home.

On a May morning in 1887, moments after giving birth to the first of twin boys, Charlotte Vieux Thorpe watched the sun streak through her family’s one-room hickory cabin and called her son Wa-Tho-Huck which translates as, “A bright path lit up at night by a bolt of lightning.” A name that suited how Jim Thorpe lived his life.

A name at odds with where he ended up in death.

1 My sporting disappointment: Jimmy White and the elusive World Championship
2 Ken Early: PSG would be sensible final move for Ronaldo
3 Rory McIlroy: Maybe I’m just not as good as I used to be
4 The Offload: Joe Schmidt the influencer is due a second act
5 World Rugby push back on extending residency rule
Real news has value SUBSCRIBE