Almost 20,000 runners set to line up in Dublin Marathon

East African runners expected to dominate the elite race for top prize of €12,000 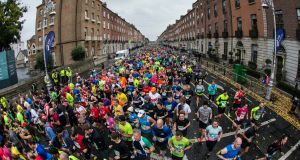 Thousands of runners on Fitzwilliam Street Upper for the start of last year’s Dublin Marathon. The expected figure of 19,500 runners this year is well up on last year’s 13,000 total. Photograph: Cathal Noonan/Inpho

It will take something even more dramatic than that to stop the East African runners dominating the elite race on Sunday.

There is still a strong Irish presence: the race also doubles as the national championships, and last year’s Athletics Ireland club entry of around 3,200 has almost doubled this year to 6,000 runners.

Indeed that’s the theme of the day – the expected 19,500 runners well up on last year’s 13,000 finishers, and for the first time in Dublin Marathon history there was a cap on the race entry. Clearly, moving the race from the traditional Bank Holiday Monday to the Sunday has broadened the appeal, both at home and away, with 13,849 Irish entries also well up on last year.

So, for the first time since 1993, two Irish runners were crowned Dublin Marathon champions: Sean Hehir, the Clare native, won the men’s race in 2:18:19 while Maria McCambridge took the women’s outright title in 2:38:51.

Hehir is running again on Sunday, having won the national title last year. In April of this year he ran a personal best time of 2:17:20 in London but that came too late for selection for the Rio Olympics.

There are several East Africans, all chasing the top prize of €12,000.

Last year’s winner Alemu Gemechu from Ethiopia, who clocked 2:14:02 in 2015, is not in town although countryman Asefe Legese Bekele, third last year in 2:14:21 is back and looking to improve. Dereje Debele Tulu from Ethiopia also has a fine record, as does Gideon Kipsang Kimosop from Kenya.

Frankly, the Irish elite entry is not as strong as recent years, primarily because many of our top marathon runners are still recovering from Rio: Fionnuala McCormack, who finished 20th in Rio, and Paul Pollock, who finished 32nd.

That’s not saying the race for the top Irish finisher won’t be interesting (that race has a more modest prize of €3,500).

Sergiu Ciobanu, who also narrowly missed out on Rio selection, ran a personal best time of 2:15:14 in Berlin last year and will fancy his chances here, with former track specialist David McCarthy from West Waterford also down to make the marathon debut.

Last year, Pauline Curley from Tullamore turned back the clock on her career to win the women’s national title at age 46; now a year older she’s back again looking to do likewise. But will face some tough competition from Fionnuala Ross from Armagh, who has already set personal bests in 2016 for the marathon and half marathon (2:49:57 in London and 74:15 for the half marathon).

Laura Graham from Down only started running in 2014, but has since progressed to 2:48:03 in London this year. She ran 2:56:46 last year to bag bronze in Dublin and a time of 78:51 saw her win the national half marathon title in August as part of the Rock ‘N’ Roll event.

Patrick Monahan is also back to defend his wheelchair title for a third successive year.

The popularity of the marathon in 2016 is exemplified by West Waterford AC, founded in 1916.

They had the novel idea of marking their centenary (and that of the Rising) by having 100 members sign up, only to easily surpass that with 150 – the largest club entry for 2016.

Whatever about trouble coming at you from all directions, there is no stopping the interest in the 26.2-mile distance.