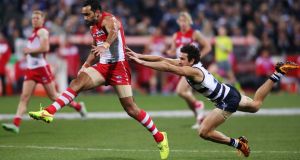 Adam Goodes of the Sydney Swans kicks the ball at goal during his return to AFL action in the game against Geelong Cats at Simonds Stadium in Geelong. Photograph: Michael Dodge/AFL Media/Getty Images

For the first time in two years, Simonds Stadium was sold out as more than 28,000 AFL fans turned out to Geelong, about 75km south-west of Melbourne, to watch the Cats take on the Sydney Swans and the return of Adam Goodes to the game.

It was hard to tell if they were there owing to the focus on the Swans and Goodes over the past fortnight, or purely to cheer on their respective teams. But what was clear was the message from both teams to the crowd: barrack with respect.

As fireworks erupted, the players ran together through one banner emblazoned with the words “fairness, unity and respect”. Then there was the pre-match video from Geelong where players delivered the same message to the gathering crowd. On each side of the field behind the goalposts, Cats and Swans supporters held up the same sign, one red, one navy blue: “Be a Goodes sport. Say no to racism.”

It would have been difficult for Goodes not to have felt under pressure. But he should have felt more welcomed than nervous, with an overwhelming show of support for him despite the few critics who weighed in. Goodes felt compelled to sit out last week’s game as crowd taunts and cruel commentary peaked, but since then, expressions of solidarity towards the former Australian of the year have come in thick and fast.

The crowd, though not perfect, largely took heed of the call to be good sports on Saturday night. The bulk of any disappointment felt by the two-time Brownlow medallist and Indigenous ambassador would be owing to the result and not the audience, with Sydney ultimately going down to Geelong by 32 points.

There were a significant few hoping to rile up the crowd: on a ground dominated by Geelong fans seeing their team play on home turf, at times cries of “sook” (Australian slang for soft) and “harden up” could be heard as Goodes approached the boundary.

Kylie Wilmot, a Swans supporter who stuck out in the sea of navy blue, told Guardian Australia the sporadic taunts directed at Goodes were disappointing, but conceded: “The response to Goodes has been vastly better than it has been over the past few weeks. I’m just so happy to see him back out there, I don’t think it’s good for any supporter of any club to have seen someone as hardworking as Goodes sitting out.”

However Lisa Cork, also barracking for the Swans, said she had noticed Cats fans gently turning on their own with pleas to “shoosh” at the rare times their peers had resorted to boos, even though their booing may not have been a dig at Goodes directly.

“A few people have reacted like that,” she said.

As the game began, a subdued, almost eerie atmosphere came over the ground, according to members of the Melbourne branch of the official Sydney Swans cheer squad.

“It’s subdued out there, it’s tense,” said Debbie Budge. “You can tell the Swans are nervous.”

Her friend, Steve Pola, agreed. The Swans seemed nervous and overly eager to pass the ball to Goodes, he said. “It’s a strange atmosphere . . . [but] Geelong are a polite crowd, a respectful crowd,” he said.

The tension lingered for the first quarter but lifted as the game entered the second, at which point the Swans were dominating in possessions and leading the Cats. A goal from Goodes late in the first quarter helped boost the team and their fans, and the crowd reaction as he scored was as would be expected from a Geelong home game.

That some people, however, were less than impressed with Goodes, was impossible to ignore. Some maintained a strong level of antagonism towards him. A few used derogatory language to describe him, though all rejected any suggestion their views were associated with racism.

When pressed, their reasoning revolved around a belief that Goodes was an attention seeker, which seemed odd since it was the crowd and their booing, not Goodes, that ensured all attention was on him for the past few weeks.

“He’s always trying to make it all about him. There are 71 other Aboriginal players and you don’t see them getting booed or making it about race if they do.”

But Brett Mollison was at the Swans versus West Coast match a couple of weeks back when the saga began as the booing of Goodes reached a crescendo, and, in a show of support for his team-mate, Lewis Jetta threw an imaginary spear at the crowd. Mollison said it was awful to witness the way Goodes was treated throughout that game.

“The booing was unlike anything I’ve heard,” he said. “I wanted it to be over. It was terrible. I just wanted to crowd to shut up and be respectful.”

For most the part, however, the crowd on Saturday night was fair, he said.

Goodes may not have been proud of his team’s performance. Their second half was a mess. But he should be proud of the conversation about racism that has resulted from his speaking out, and the awareness that has been raised about the ongoing pain and harm racism leaves in its wake.