13 Irish crews to compete in rowing championships in Monaco 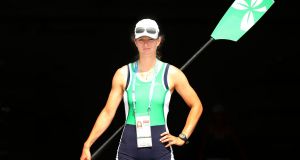 Monika Dukarska will be aiming for gold this weekend at the World Coastal Rowing Championships in Monaco. Photograph: Cathal Noonan/Inpho

Top Ireland internationals will compete in big events in Boston and Monaco this weekend, while October continues to be a busy month on and off the water in Ireland.

At the World Coastal Rowing Championships in Monaco, Monika Dukarska looks the most likely prospect for success. The Killorglin woman competes in the women’s solo (single), in which she won gold in 2009.

There are a remarkable 13 crews from Ireland entered – from Arklow in Wicklow; Galley Flash and Courtmacsherry (both Cork); Portmagee and Killorglin (both Kerry). The overall entry was so big that qualification races began yesterday.

Olympian Sanita Puspure and Olympic silver medallists Paul and Gary O’Donovan are in Massachusetts for the Head of the Charles regatta. The head boasts all the attractions of New England in autumn for the hundreds of thousands of spectators. It draws a who’s who of top rowers.

Puspure is part of a “great eight” which includes nearly all the top women scullers in the world and she will also compete in the Championship double with Magdalena Lobnig of Austria.

The meeting of university captains set for Portlaoise this Saturday has been cancelled, but team-building for the Ireland high performance group will gather momentum next weekend. A group of 45 senior athletes have been invited to a training weekend in Dublin (for women) and at the National Rowing Centre in Cork (women and men).

Ireland high-performance director Morten Espersen has made a controversial pronouncement: junior and under-23 athletes who are “going for” World Championship selection cannot compete at the Irish Championships in 2017 because of the clash with the departure time for the bigger events.

The decision will not be popular with clubs – it would be really tough for a last-year junior who would have to balance the chance of representing their country against what might be their one chance of taking a national title at under-18 level.

Because the senior World Championships are in late September, the international athletes shall be able to compete.

The number of applicants for the coaching jobs in the Ireland high-performance system topped out at 25. Interviews may begin as early as next week.

Espersen has announced four grants will be available to rowers who produce exceptional performances on rowing machines.

There will also be four travel scholarships for taking part in the ‘Crash Bs’ in Boston in February, for those who have achieved outstanding performance(s) at Irish Indoor Rowing Championships in Limerick. The evaluation panel will consist of Espersen, Joe Cantillon, the organiser of the Irish Indoor Championships and Alex Dunne of Concept 2.

The egm of Rowing Ireland passed the two procedural motions before it, while one of the highlights of the Coaching Conference was a presentation to the O’Donovan brothers and Sanita Puspure by John Treacy of Sport Ireland.