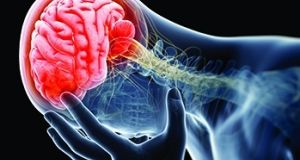 Concussion is suspected of causing various degenerative brain diseases and there is evidence to suggest that blows to the head are not good for the brain.

It took 15 years for science to show that the tobacco industry was lying and that smoking cigarettes did cause lung cancer. The suspicions and links had been there long before but linkage and causation are two vastly different concepts.

Concussion is suspected of causing various degenerative brain diseases and there is linkage to show that blows to the head are not good for the brain.

While the association is there, the causation, which is the greater burden of proof is not.

This week Dr Michael Turner, Colin Moynihan, a British MP for 10 years who served under prime minister Margaret Thatcher and Richard Dunwoody, the three-time champion national hunt jockey, came to Dublin to launch a project called the International Concussion and Head Injury Research Foundation (ICHIRF). It’s aiming to dispel the guesswork around the issue of concussion.

The long term study aims to address a lack of knowledge and seeks to establish whether retired sportsmen and sportswomen have a higher incidence, or suffer an earlier onset, of neuro-degenerative disorders such as Parkinson’s Disease, Alzheimer’s Disease.

In a humorous but devastating illustration, Dunwoody spoke about his own brush with head trauma. The two-time Aintree Grand National winner, who before retirement rode 1,800 winners, was typical of most jockeys and regularly fell off his horse.

In his career, Dunwoody was unseated 682 times and from those falls suffered around eight concussions. His grandfather, who rode in the 1920s and 30s fractured his skull in a fall and was in a coma for three weeks.

His father rode too and missed a ride in the 1950 Grand National because of a fractured skull. Both men suffered from dementia in older age.

Generation three is Dunwoody himself. At the end of the season in June 1995 he took a tumble at the 11th fence at Hereford.

“I always remember the day,” he says. “I was riding a horse rather aptly named James Pigg for Martin Pipe and apparently I fell at the 11th. I had no clue what happened in the race whatsoever.

“I came back towards the weighing room. I spoke to Martin Pipe apparently, went into the corner, sat down in my usual place. All the lads knew I was concussed because I had a big smile on my face.

“Anyway, I was sat there and I haven’t a clue where I am or what I’ve done and in those days there wasn’t a Racing Post it was the Sporting Life to try and see what I had ridden and what I was going to ride later on.

“I am all over the front page. Huge headlines. ‘Dunwoody Leaves Pipe’. I am astounded because I have been riding for Martin for two years. As far as I remember we were getting on fine. It was down to Martin that I was champion jockey for those two seasons.

“He was the best trainer in the world and why in hell was I leaving? Absolutely incredible. So I read all the way through the article and at the bottom ‘Dunwoody has also divorced from his wife this year’. Again, hadn’t had a clue. Lost a complete year of my life.

“It wasn’t until I was driving on the way home that I remembered I also had a girlfriend that I had been seeing for six months. Concussion can do very strange things to you and I am fascinated to see the findings this study may throw up.”

The online study has kicked off with jockeys because of the high incidence of concussion in that sport but is open to everyone who has competed in impact sports.

Initial volunteers are Dunwoody, Tony McCoy, Peter Scudamore and John Francome, all jockeys but they hope to attract rugby and Gaelic Games players to the study and build it into something similar to the Framingham Heart Study, which began in 1948 by recruiting 5,209 men and women between the ages of 30 and 62 from the town of Framingham, Massachusetts.

Over the years, monitoring of the Framingham Study population has led to the identification of major cardiovascular disease risk factors and the effects of age and gender as well as the relationships between physical traits and genetic patterns.

“Anybody, any sport can sign up (www.ichirf.org). Screening would take about an hour,” said medical director of the research, Dr Turner.

“Each sport has got to address its own situation,” he added before pointing out that pitch-side assessments in rugby are part of a debate that needs to take place.

“If it takes half an hour to diagnose a jockey, how can you do it (in rugby) in five or ten minutes?” he asked.

Neither time span, he might have added, is based on scientific evidence, which in time this study hopes to have at its disposal.

1 Gordon D’Arcy: Digging deep only recipe for Twickenham success
2 Robbie Henshaw and Bundee Aki to lead from the centre
3 Jurgen Klopp: ‘welcome to Anfield, it’s not over yet’
4 Munster awaiting details of latest medical update on Joey Carbery
5 Ireland to stick with winning formula against England
Real news has value SUBSCRIBE

Jurgen Klopp: ‘welcome to Anfield, it’s not over yet’ 07:55
Liverpool frustrated and beaten in first leg in Madrid; Ireland to reveal XV for England 07:30
Seán Moran: GAA in trouble if sectional interests not accountable to rules 07:00
Connacht seek Dillane’s release from Irish camp for Edinburgh clash 06:00
Munster awaiting details of latest medical update on Joey Carbery 06:00