Mystic McGregor is now a law unto himself 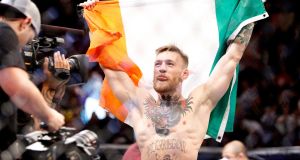 Maybe it’s stretching things to describe Conor McGregor’s 13-second knockout of Jose Aldo as a miracle. Let’s just say that if he’d been doing this stuff in old Israel 2,000 years ago, there’s a decent chance that McGregorism would today be a major world religion.

Nobody scripts that kind of outcome. Imagine the withering exchanges at the writers’ meeting if somebody suggested it. “So . . . your idea is that he predicts he’ll win by knockout in the first round, after the champ swings a wild right hand, and then he proceeds to knock him out in precisely those circumstances after 13 seconds? Oh I’m sorry, I didn’t realise we were making the ninth fu**ing Harry Potter movie.”

American sports journalism has its “no cheering in the press box” conventions designed to reinforce the message that acting like a fan is in poor taste. But when McGregor walked into the press conference several journalists scrambled forward with their phones to take pictures.

The champion stood at the podium and surveyed the room with a statesmanlike air – the Crumlin Obama, though the other Obama would have worn a more boring suit.

“If you can see it here,” McGregor said, pointing to his head, “and you have the courage enough to speak it, it will happen. So. I see these shots, I see these sequences, and I don’t shy away from them.

“A lot of times people believe in certain things but they keep it to themselves. They don’t put it out there. If you truly believe in it, if you become vocal with it, you are creating that law of attraction and it will become reality. I knew he would overextend, and I knew I would catch him, so. Mystic Mac strikes again.”

This was probably the most explicit public allusion McGregor has made to the belief system that governs his life.

His victory will send another wave of people to YouTube to watch The Secret, the 2006 self-help documentary that shaped McGregor’s worldview.

In a nutshell, The Secret is that Paula Abdul couldn’t have been more wrong. Like Attracts like. “Everything that’s coming into your life you’re attracting into your life,” one talking head explains. “And it’s attracted to you by virtue of the images you’re holding in your mind.”

The documentary sets out a vision of the universe as a kind of Argos catalogue that can be accessed through the power of your mind. If you visualise happiness, fortune, fame – the universe will send them your way.

If your thoughts are dominated by the things that worry and frighten you, the universe will give those things to you too. The physical mechanism by which this actually happens is never spelled out beyond vague references to frequencies and magnetism.

A sceptical assessment would conclude that the law of attraction is a classic unfalsifiable belief system that exploits cognitive quirks like frequency illusion, confirmation bias and selective perception to buttress its fantastic claims.

Maybe it’s just a coincidence that the law of attraction implies some rather conservative conclusions about the real world, such as: wealthy people are wealthy because they’re sending out the right mind waves to the universe.

Another conclusion that follows from the Law is that things like poverty and disease are your own fault for thinking about the wrong stuff. One woman tells us that she recovered from breast cancer by watching funny movies and thinking positive.

McGregor has assiduously applied the theory, “visualising” and speaking about success and refusing to countenance the sort of negativity others mistakenly call “realism”. You could see this at work in a recent interview he did with Gareth A. Davies of BT Sport.

“What happens if you do lose to Jose Aldo?” Davies asked.

“Can you not allow yourself as a fighter, then, to go into that-“

“Is it like a safe in your brain that’s locked?”

By now McGregor was looking away to indicate he was not interested in pursuing this line of questioning any further. Even talking about not thinking about failure risks allowing it to creep in under the door.

McGregor’s championing of the Law is unlikely to change now that the universe has made it so obvious that it really does love him.

He’d hardly be the first athlete to build his competitive mentality around some questionable beliefs. Two of the Brazilian fighters at UFC 194 had celebrated their victories with Brazil flags that had “JESUS” inscribed across the blue central circle. The Law of Attraction is McGregor’s 100 per cent Jesus headband. Maybe visualisation fulfils the same practical function for him as prayer does for the conventionally devout: to clear and calm the mind, to help you figure out what it is you actually want out of life. A pragmatic take might be that if this stuff works for him, then what’s the problem?

Then you think about all the McGregor fans out there, with their McGregor hair and McGregor beards and off-the-peg McGregor attitude, who’ll soon be watching The Secret and trying to apply the law of attraction in their own lives, and you just hope it works out for them.

To say that the universe helped to draw Jose Aldo’s jaw onto McGregor’s left fist would be to underrate his own role in what he has achieved.

In those 13 seconds he displayed an extraordinary timing and precision that reminded you of the impossible Lionel Messi nutmegs that make it seem like Messi sees everything in slow motion.

That McGregor has attained that impossible level of skill is really his own doing. But if he insists on sharing the credit with some dubious law of the universe, who’s going to tell him otherwise?