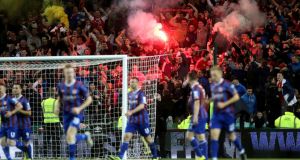 If St Pat’s were awarded a euro for every time their FAI Cup drought was mentioned in the last week, they’d have Messi, Ibrahimovic and Ronaldo up front next season. It must have been wearying for the club and its supporters, people harping on and on about how the world was back in 1961, the year Chubby Checker topped the hit parade with Let’s Twist Again, John F Kennedy became president and we had our first RTÉ telly broadcast.

Among Pat’s supporters in the crowd yesterday was their old-boy Paul McGrath – who was on this earth less than two years when his beloveds last won the competition. That was also the year Mongolia and Mauritania joined the United Nations and Suggs from Ryanair and Michael O’Leary of Madness were born.

That was twice, then, in a week that we were treated to the maestro on our telly screens – McGrath, not Suggs/O’Leary – the first his appearance on Second Captains. Before he came on, Shane Horgan recalled being at a testimonial where every big name in Irish sport turned up, but the queues to say hello to McGrath stretched around the corner, while everyone else was busy hollering “hellooooo, anyone want a signed photograph?”

Of course, the last person to seem to understand this veneration of Paul McGrath is Paul McGrath, which is another reason why he’s venerated, although Robbie Keane, he recalled, was less than reverential when the pair first squared up to each other in a club game, McGrath a seasoned international at that point, Keane a whipper snapper.

“He was 17, turning me this way and that. My knees were killing me. I said, ‘look, I’m Irish – do you know who I am, like?’ but there was just disregard, he came at me again, twist, turn, twist. A 17-year-old cheeky git. I felt like giving him a backhander. He was man of the match, too. I was just happy he was Irish,” he smiled.

Had he read the finished work, though? No. “I lived the mess, I didn’t really want to go through it again. And I told my kids not to read it, there are some things in there I don’t want them to see.”

Paul McGrath needs to be on our tellies more, you could listen to the fella forever.

Mind you, Rory McIlroy fans might switch channels now that their fella has been removed from the Second Captains’ Good Wall, McGrath replacing him with Keith Wood. And not even a tweet from Norman Whiteside could persuade the Dubliner to find a place for the Belfast Boy on the board. Ruthless, like.

Earlier, Donal Óg Cusack and hockey international Nikki Symmons spoke powerfully about being openly gay in their sports, so it was one a heck of a show. Both said their coming out was less stressful than they might have anticipated, although to this day Donal Óg gets some curious letters. Like the person who wrote to him to complain that he was expressing his sexuality by wearing a dickie bow on telly. “What about George Hook, like,” Donal Óg asked, not unreasonably.

And then there was the fella he met at a Stag’s do who wanted advice on organising a wedding. A few gays were coming to the shindig. “Should I put them all sitting at the one table,” he asked.

Back to Lansdowne yesterday and Raheny United made it an FAI Cup three-in-row, a record of success Pat’s could but dream of. But by full-time they had consigned Chubby Checker, Suggs and Michael O’Leary to the dim and distant past of the 1960s, drought done and dusted.

Any one would think there was history there.

1 Getting behind the rotten core of rugby with Dan Tuohy
2 Ryan Baird scores a hat-trick as blue wave rolls over Glasgow
3 Irish squad in the dark as clouds hang over Six Nations
4 Larry McCarthy to become first overseas president of the GAA
5 Football fan survey: Manchester United still top the league among Irish fans
Real news has value SUBSCRIBE