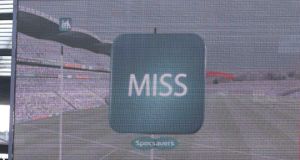 Hawk-Eye representatives have apologised for the error in last Sunday’s All-Ireland MHC semi-final and ascribed the mistake to an “error in match-day set-up”. Photograph: Inpho

A statement released by Hawk-Eye, the company behind the GAA’s malfunctioning score detection system, has ascribed the incorrect decision to disallow a point for the Limerick minors in the first minute of Sunday’s All-Ireland semi-final against Galway to an “error in match-day set-up”.

As a result of this error, Limerick announced last night that the county would be “lodging an appeal with the CCCC (Central Competition Control Committee) based on the failure of the Hawk Eye score detection system”. It goes on to state that: “In the interests of fairness to all involved we will be not be making any further comment until the full process has been determined.”

According to the Hawk-Eye release, “all of the settings were adjusted to cater for hurling, bar one value for the Hill 16 end posts, which was set for football.”

The impact of this arises because Hawk-Eye automatically disallows any score that hits the post, as its image generation can’t plot the trajectory of a rebound.

Between the posts
As it was reading the sliotar as a football, which is considerably larger, it deemed that the ball had hit the post and therefore declared the shot by Limerick’s Barry Nash a ‘miss’ even though the graphic clearly showed the shot passing between the posts.

According to Steve Carter, the MD of Hawk Eye Innovations, who met with the representatives of the GAA, “operational steps are being taken, under my personal supervision, to ensure there will be no repetition.” The company also apologised to “the GAA and its supporters and to reassure them that the system will be fully reliable for all future games”.

Speaking earlier yesterday about Limerick’s minor manager Brian Ryan’s immediate post-match comments that he would not be taking the matter any further, county secretary Mike O’Riordan said: “I’m not sure he was aware of the full facts”.

Eamonn Cregan, the former All-Ireland medallist and minor selector, said that the events had been an injustice. “It’s unfair for players and all of those involved that a perfectly good point was disallowed because of a computer error.”

On the question of Galway offering a re-fixture in the unusual circumstances, Pat Kearney, secretary of the county’s hurling committee, said before news of Limerick’s objection that the matter hadn’t been discussed. “As far as we’re concerned the game finished in Croke Park,” he said last night. “Once the referee makes a decision in relation to a score we accept that. There’s been no discussion about it at all.”

Every shot during a match is analysed by Hawk-Eye and although the vast majority cause no controversy, those that do are generally requested to be shown on the screens in Croke Park and also on the television broadcast.

In cases where there is no query from the pitch but the system shows a different outcome to that awarded, the review official (in this case Tipperary’s Willie Barrett) informs the referee, who then calls for the determination to be screened.

This is what happened on Sunday. The computer output of the graphic and the verdict is all part of the one function. The only role of the video official is to broadcast the outcome and inform the referee.

The rules however appear to be quite clear on the status of Hawk-Eye decisions. They are endorsed by the referee and effectively become a decision of the match official and part of the referee’s report – effectively making this a case of refereeing error.

Challenging the result
Disputed scores are not valid grounds for challenging the results of matches. According to Rule 7.10 (n) of the Official Guide: “… however no Objection or Counter-Objection may be submitted on grounds that a referee had incorrectly allowed or failed to allow a score.”

Coincidentally, Limerick provides the confirmation for this, as it was a 2005 ruling of the Disputes Resolution Authority (DRA) – the independent arbitration body which may yet end up hearing this matter – on a football match in the county between Fr Casey’s and St Senan’s, which gave rise to consideration of a challenge from the former, based on a refereeing error during the match.

“If Fr Casey’s are correct that there was a mistake in this case and that it changed the outcome of the game, then one must have sympathy for them. However, even if they are right on both of these issues, this cannot allow for an erosion of the principle of referees’ control.

“How an error at any particular stage in a game will affect the outcome is something of an imponderable, and the fact that injustice will occasionally result from a blanket protection of referees’ decisions is a consequence that must be borne by all1. It is the lesser evil.”

This was cited in the controversial case of the 2010 Leinster final when a clearly invalid score won the match for Meath against Louth. At the time the GAA emphasised that it had no power to change a referee’s report after the fact.