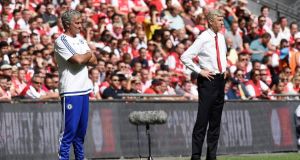 The Arsenal players were coming back down the Wembley stand with their medals, and José Mourinho was waiting for them at the bottom of the steps.

The players’ expressions ranged from amusement to bemusement as Mourinho pumped their hands and slapped their backs. What was he doing? The losing coach doesn’t usually wait around to congratulate all the opposing players individually.

The answer became plain as the tall, white-shirted figure of Arsène Wenger hove into view at the rear of Arsenal’s procession.

The last Arsenal man to be congratulated by Mourinho was the man of the match, Alex Oxlade-Chamberlain. Mourinho turned to his left to send the Ox on his way with an extra pat on the head. As though by coincidence, this movement meant he had to turn his back on Arsène Wenger, who was already dodging left to avoid him anyway. The crowd cheered. Rival fans then argued on social media over who had snubbed whom.

It was, of course, Mourinho who engineered the situation with his ostentatious display of what people might once have called “class”, so it seems fair that he should claim most of the credit.

Mourinho preferred to give the credit to Wenger: the only thing on his own mind, he explained, had been dignity. “I was doing what I have to do for myself and the club, which was to be there for the winners. To wait for them, in a point that you only miss me if you want to miss me. Every Arsenal player came in my direction, which was the easiest thing to do, because I was just there. And if other people didn’t come in my direction, that’s not a problem, that’s not a story. I did the job that my club deserves me to do, and with my status as a manager I have to do.”

That’s José Mourinho, always carefully choosing the most dignified course of action. His lifelong commitment to dignity was never more evident than last week, when he told Rafael Benítez’s wife to spend less time speaking about him, and more time looking after Rafa’s diet.

It was Arsène Wenger’s first ever victory against a José Mourinho side after 14 attempts. Mourinho had harped on about that record, suggesting that he personally would never have been able to endure such a run. In Wenger’s position, Mourinho said, he’d “try to find a different way, try to find the reasons why it goes all the time against my team.”

Maybe Wenger took his advice. The teams Mourinho has struggled to beat are the ones that use his own tactics against him. Defend deep, let the other team take the initiative, ruthlessly punish mistakes. That’s what Arsenal did yesterday.

Mourinho was full of ironic praise for Arsenal. He explained that if he looked at football the way the media did, he’d have to conclude that “the best team lost”. Chelsea had had more possession, more control, more chances.

“But there is another perspective,” Mourinho said. “A team that leave their philosophy in the dressing room, and change their attitude and their philosophy, and accumulate 10 players behind the ball every time, play all the second half with nine players in front of the box – this is football, this is very good tactical organisation. In that perspective, they score one goal, they deserve to win.”

In other words, Arsenal had won by impersonating Chelsea, so in a way, Mourinho could take more credit for their victory than Wenger, whose team had betrayed his precious principles.

Still, whatever the consolations to be eked out from irritating Arsène Wenger, Mourinho still has to deal with a couple of irritants in the last week before the league kicks off. The main one is that Chelsea have not spent much money this summer compared to their rivals.

Last week, when Mourinho was asked about that spending gap, he sounded a bit like the old woman who lived in a shoe: “To bring good players is good for one thing, but to bring new players you have also to let some players go. When you’re champions, you owe something to the players. As a manager, I feel that I owe something to the players. In being champion and kicking people out, to bring new blood, I prefer the loyalty. I prefer the group to know that I’m there for them, and I recognise what they did for us, even if other teams invest hugely and they go with lots of new faces, I prefer this feeling of loyalty to the squad.”

By kick-off yesterday he was already sounding a bit underfunded: “If almost every team is investing massively, and we have basically the same team as we had, then the only way to improve is if the ones that we have can do a little bit better.”

Mourinho’s tune could change rather abruptly from “I’m happy to do more with less” to “Chelsea are asking me to win the league with one hand tied behind my back”, and that’s the moment when things could start to get unexpectedly tense at the home of the champions.

1 Gerry Thornley: Saracens very late to apologise for repeated cheating
2 How to get to the Champions Cup final without breaking the bank
3 Confident Rory McIlroy returns to competition at Torrey Pines
4 Liverpool’s brilliance masking their recent sloppiness
5 Ken Early: Solskjaer’s short-term gambles proving very costly for United
Real news has value SUBSCRIBE
Here is your handy guide to sport on television this week