Katie Taylor wins her fourth Sportswoman of the Year award

Following an outstanding year for Irish women in sport, Taylor was among 15 sports stars nominated for the 2014 title. It is her fourth time to win the award having previously won it in 2007, 2008 and 2012. 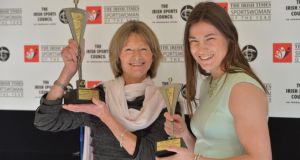 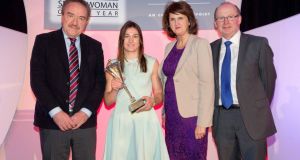 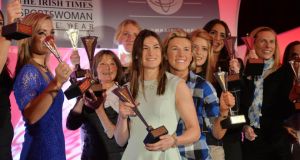 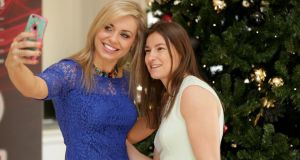 Boxer Katie Taylor has been crowned The Irish Times/Irish Sports Council ‘Sportswoman of the Year 2014’ for her exceptional achievement in winning a record breaking sixth European title and her fifth consecutive world title.

Taylor won her Sportswoman of the Month award in June after she claimed her sixth European title in Bucharest. Just last month the Bray boxer won her fifth consecutive world title at the AIBA Women’s Word Championships at Jeju, South Korea.

Following an outstanding year for Irish women in sport, Taylor was among 15 sports stars nominated for the 2014 title. It is her fourth time to win the award having previously won it in 2007, 2008 and 2012.

Taylor was presented with her award by Tánaiste Joan Burton at an awards ceremony in Dublin on Friday. This year marks the 10th anniversary of the Sportswoman of the Year awards which recognise the abilities and achievements of women in Irish sports.

Speaking after her win, Taylor said: “I’m honoured and delighted to be named the Irish Times/Irish Sports Council Sportswoman of the Year 2014. This has been an amazing year for me and for Irish women in sport and I would like to congratulate all the finalists in their respective fields who have excelled at major sporting events.

“Whether it’s Fiona Coghlan or Maria McCambridge or Chloe Mustaki or Briege Corkery, all the finalists have played a huge part in gaining much needed recognition for females in sports. It is wonderful to have an award like this as it recognises Irish Sports women and the amazing achievements that have brought us all here today.”

The Tánaiste added: “Irish sportswomen have excelled both nationally and internationally in a range of sports. Today we have recognised Irish women from a wide range of sports including soccer, athletics, boxing, golf and Gaelic games. Their success is a result of the commitment and dedication which they give to their chosen sports.

“Their exploits will help motivate thousands of girls and young women to continue to excel in sport, giving us a new generation of Irish sportswomen to be proud of. To the ladies celebrated here today I would say: Ireland needs you as sports heroes. We share in your continued success and are looking forward to watching your careers soar even higher.

“On the 10th birthday of this event I want to also thank The Irish Times and the Irish Sports Council for their continued support of these awards over the last decade. They have played a tremendous role in highlighting the successes of Irish women in national and international sporting arenas over that time.”

The 15 nominees received their monthly awards from Minister of State Michael Ring TD. and Kevin O’Sullivan, Editor, The Irish Times.

Mr O’Sullivan said the award winners represented a golden generation in Irish sport. “Here today we have some of the greatest talents who have ever represented their sports, their families, their counties and their country. They are the true essence of sporting achievement and carry their success with a beguiling mix of humility, honesty and style”.

“The extraordinary women who featured through the campaign serve as role models for every aspiring athlete, and that is something that truly deserves celebration. Whether you won today or yesteryear we want to thank you for making us proud and we wish you all the best in your future endeavours.”

Horse racing trainer Joanna Morgan was awarded a Lifetime Achievement Award for her valued contribution to the world of racing by Tánaiste Joan Burton. Born in the small Welsh town of Crickhowell, Morgan began riding in Ireland aged 21 in 1974, becoming Ireland’s first female professional jockey. Five years later she became the first woman to ride at Royal Ascot and continued to break down barriers by becoming the first woman to ride in an Irish Classic. A mother of three, Morgan retired as a jockey in 1997 having ridden more than 200 winners.

She is now a widely respected trainer based at Ballivor in Co Meath. Indeed 35 years after making history as a jockey at Royal Ascot – she trained a winner at the famous venue – Roca Tomu in the Britannia Handicap.

January: (Baskekball) Basketball player Gráinne Dwyer who was named MVP for her performance in the Superleague National Cup final

April: Soccer player Savannah McCarthy who was the FAI’s 2013 under-17 international player of the year

May: Rower Sanita Puspure who took bronze in the single sculls at the European Championships

June: Golfer Stephanie Meadow who finished third in the US Open in her first year as a professional

July: Soccer player Chloe Mustaki who captained the Irish uner-19 team to the semi-finals of the European Championships

August: Rugby player Fiona Coghlan who captained Ireland to the semi-finals of the World Cup campaign.

October: Maria McCambridge who achieved a personal best in the Dublin marathon.

November: Triathlete Aileen Reid who finished eighth in the world rankings and soccer player Stephanie Roche whose stunning goal over a year ago was nominated for Fifa’s Puskas Goal of the Year Award this year and made it to the final three.