Juliet Murphy: ‘I miss it more now than when I first retired’ 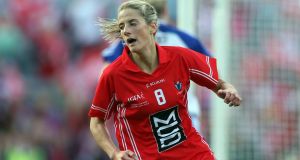 Juliet Murphy: “I miss it more now than when I first retired. To be honest, I am probably struggling more with it now than I did originally.”

One of the all-time greats of women’s Gaelic football, Juliet Murphy has played very little since her retirement in 2013. As well being a gym manager, she is a primary school teacher and a Masters student at CIT so football went by the wayside. That changes this weekend, however, as she lines out for Cork Institute of Technology in the Giles Cup in Tralee. How much football have you been playing? None really. When I decided to do the Masters back in August, I got a text from Jessica O’Shea who I would have played with for Cork. She’s the co-captain of the team and she just said, “I hear you’re back in college – any interest in playing?” And I didn’t, to be honest. I really had too much on. What changed? They just said to me and that it wouldn’t be any pressure. Just sign up and see how you go. They’ve been great. I haven’t been to all the training because I would have a lot of work commitments in the evening with the gym. But I go as much as I physically can. When you retired, did you go cold turkey? I did, really. I finished up in 2013 and then in 2014 I didn’t play anything. I played a little bit with the club since but only in dribs and drabs.

It’s funny, I didn’t commit to anything. I was always saying, “I won’t, I won’t” and then a few times at the last minute, I played. That wasn’t how I planned it. So when the college thing came around, I thought that a bit of regular training would be good for my mind. Did you miss it? I miss it more now than when I first retired. To be honest, I am probably struggling more with it now than I did originally. The first year for me was new and I was doing a bit of work with TG4 and I was kind of throwing myself into that. It’s different now. Eamonn [Ryan] has gone from the Cork team and three of the girls have had babies so everything has changed so much. I feel a void now that I didn’t previously. How come? I think it’s just a very basic thing that football was always there. No matter how a day went, you went to training and you met with a group of people and you pushed your body, you worked hard, and you got huge satisfaction from it. There was that sense of release from it as a form of expression and a sense of confidence that sport can bring. That’s missing now.

Even if I go out for a run now, it’s a hardship to make myself go out and do it. Even though I know I will feel better afterwards and even though I know it will be good for me. With football, I never had that struggle. Have you any itch to go back playing full-time? No. No. This is just, I’m back in the college so I’m playing a bit. I didn’t think anything of it really because it was put to me in such a manner – it was like, “Just come along and play away.” I guess it’s not as onerous as going back and giving a commitment to the club or to play intercounty. I didn’t really think about it too much. Big weekend coming up? Yeah, I’ve really only been thinking about it properly this week. All along, we were just playing our games and our focus was on that. I didn’t even think about where it would all end up. So much so that away back, some friends of mine were signing up to the Killarney Quest Adventure Series, which is on this weekend. So I’ll have to give that a miss. How does a semi-final Friday, final Saturday appeal to you? I think if we’re lucky enough to get through, games two days in a row might be a little problematic for someone like me at my age. I look at the Ireland team and their five-day turnaround in the Six Nations and I would be thinking that I’d need nearly 10 days after a match to recover! So we’ll see. You’re only 36 – you’re hardly a geriatric... I know! But I’d be a bit concerned because I don’t have the strength and conditioning done that I would have had when I was playing club and intercounty. Ah, it’ll be fine.