‘The league is exposing a wider group of players to better hockey,’ says ex-Ireland goalkeeper 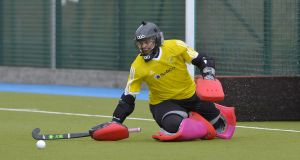 This season has been a big one for domestic hockey with the inaugural all-Ireland Hockey League in which the provinces’ leading teams played 18 games home and away with the target of qualifying for this weekend’s Champions Trophy at Banbridge. Four men’s and four women’s clubs will square up in Saturday’s semi-finals, with the finals taking place on Sunday.

The league had its opponents when it was first proposed, most notably in Ulster where the chief concerns focussed on the impact of the elite competition on provincial leagues and schools’ hockey, as well as the travel costs for the competing clubs.

But for the captain of Hermes, favourites to win the women’s inaugural title, the league has been a triumph, Emma Gray, Ireland’s most-capped female goalkeeper (she retired last year on 118 caps), seeing only positives from the experience this season.

There was plenty of heated debate about the proposal, but what’s your verdict on the opening season?

I think it’s been nothing but successful, playing top quality games week in week out has been exciting and the standard we’ve been playing at has been great. The Leinster League was competitive in a sense, but there were two tiers to it, you’d play just four or five top teams. This year, though, you’ve had to be at your best every week because you know you’re going to have it tough. And the travel, too, has made it more challenging, although I think Dublin-based teams are lucky, they’re definitely at an advantage. We can hop in a car on a Saturday morning and be in, say, Belfast or Cork in a couple of hours, compared to the travel northern and southern clubs face.

But we’re definitely playing at a higher level, and you’d hope it’ll help push the level higher again. It all just means you can’t get caught in bad habits, something you might have got away with in the provincial league you get punished for now. It’s exposing a wider group of players to better hockey, so that should naturally help the international players in the longer term. On our team we have a number of Irish under-18 players so you would hope the benefits of playing at this level will feed all the way up to the senior team.

So, I think the whole league has been a success, it’s attracted a lot of attention in terms of spectators and media, and the hockey’s been good. So I hope the doubters have seen the benefits of it and the enjoyment we’ve been getting from it as well.

In another ambitious move, it was confirmed this week that Monkstown and Hermes are merging – you’ll be known as Hermes-Monkstown for the first three years. Does that sound weird?

It does! I was involved in the talks with Monkstown from the beginning. There were two opposite emotions, a little sadness because Hermes has been so much part of my life, but it just became clear to us that we needed to try and do something different in terms of development. There was some resistance from people who are traditionalists, the naming issue and all that, it was highly emotive, but it’s being done for the longer term development of the club and for player development. Ultimately the ambition is to win trophies, to have two teams competing at the top level and not just in Irish hockey but hopefully European hockey too. I’m really excited about the future now.

So, if Hermes prevail at the weekend and become All-Ireland champions, it would cap an eventful week.

It would, it could be a really big week for us. But it’s a long time since we’ve won a national title, we didn’t win the competition in its previous format [Pegasus, UCD, Railway Union and Loreto shared the honours between 2009 and 2015] and it’s 10 years since we won the Irish Senior Cup. We’ve been in finals, but we haven’t got our hands on one of those trophies so it would mean a huge amount to us.

You won the league phase of the competition with four games to spare, and you beat Ulster Elks, your semi-final opponents, 7-0 at Jordanstown last month. And you had three wins and a draw from your meetings with Pegasus and Railway Union, the other semi-finalists. Red hot favourites?

We will be favourites in most people’s eyes, but we start again on Saturday. Elks have an incredible record in the cup, back to back Irish Senior Cup winners, so I wouldn’t read much in to that 7-0, it means nothing. The league goes out the window, it’s a cup competition now so it’s a lot different.