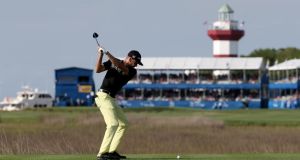 Troy Merritt hits his tee shot on the 18th hole during the third round of the RBC Heritage at Harbour Town Golf Links on Hilton Head Island, South Carolina. Photo: Streeter Lecka/Getty Images

Troy Merritt will take a three-shot lead into the final round of the RBC Heritage but will be looking over his shoulder with a host of big names in the chasing pack.

The American followed up his course-record 61 on Friday with a 69 to move to 14 under, three clear of Brendon Todd, Kevin Kisner and Ryder Cup star Matt Kuchar.

“I was starting to feel the fear and being afraid, like I would when I was an amateur,” Merritt said on the PGA Tour website.

“It’s not a bad fear; it’s the fear of being caught. And I think it’s worked for me in the past. ”

Merritt recorded birdies on two and three but gave those shots back with a double-bogey on the eighth before picking up a shot on nine.

One further birdie would follow on the 14th as the 29-year-old seeks his first career PGA Tour win.

All eyes were on Spieth coming into the tournament and he followed up Friday’s 62 with a 68 to sit just five shots off the lead after four birdies and a single bogey.

The round of the day belonged to Todd who catapulted himself into contention with a stunning flawless 63.

The American made the turn in 31 after five birdies in seven holes from the third. More shots were picked up on 11 and 16 before a chip in on 18 gave him his eighth birdie of the day.

“I came up a little short there with my six-iron coming into the green,” Todd told www.pgatour.com. “I had a long chip with a lot of green.

“I used my pitching wedge and I kind of knew it went right at the hole. I was just fortunate to get it on line there.”

Kisner fired a 67 while Kuchar recorded a 68 and Brice Garnett and Branden Grace sit alongside Furyk a further shot back.

Bo Van Pelt is with Spieth on nine under while Brendon de Jonge, Justin Thomas, Morgan Hoffman and John Merrick are in the group with McDowell, Donald and Oosthuizen.

McDowell recorded back-to-back bogeys on the third and fourth holes to turn in 38 but three birdies coming home saw him sign for a one-under round of 70.

Tournament organisers have announced that players will play from two tees on Sunday and tee off between 7.30 and 9.30am local time (12.30pm to 2.30pm Irish time) due to a threat of bad weather.