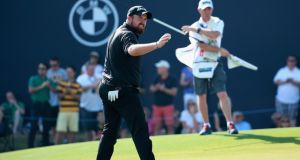 Shane Lowry acknowledges the crowd on the 18th green during the third round of the DP World Tour Championship in Dubai. Photograph: Warren Little/Getty Images

I ’ve lost count of how many flights I’ve been on this year, but there’s no better feeling than coming home. The sight you get when you land at Dublin Airport is, to be honest, my favourite view in the world. I got home on Monday after being on tour for six weeks, which I think is my longest stint ever away, and it just felt so nice. And, of course, so much has changed.

For one, I’m newly engaged; for another, I’ve risen to 44th in the world rankings and guaranteed that invite to the US Masters. I’m in the best place – on and off the course – I have ever been in.

The past few months have been a whirlwind, and it’s only in the past few days that I’ve had time to reflect and to savour what I’ve achieved. Some people may point and say, “Sure you didn’t win anything” – and I take that on board – but it has still been a great year and I intend to change my scheduling for next year with a greater emphasis on playing in the US. I want to combine playing on both tours, the PGA Tour and the European Tour, and I intend sitting down with my manager Conor Ridge in the coming days and working out an itinerary. I’m excited about where I’m going.

It’s some contrast with how I felt earlier on this year. In Dubai in the final days of January, I went back to my hotel after missing the cut in the Desert Classic by a shot. I’d also missed by one stroke in Qatar the week before. And also missed the cut in Abu Dhabi. My head was wrecked. I didn’t know what to think or know why I was missing cuts.

The contrast in my emotions between Dubai in January and Dubai (where the Race ended) in November was black and white. Despair to joy, I suppose.

Playing golf can be lonely when things are not going your way, and I reached my lowest in the Desert Classic. It’s a tough sport to play when you’re not getting results. There’s nowhere to hide. There’s a temptation after missing a cut or having a bad round to go back to your hotel and order room service but I tried not to fall into that. I went out with the lads for dinner and used the weekends to practice. Tried to get better.

How did it all change? It wasn’t as if I just flicked a switch and it all turned from darkness to light. The start of the year, when I missed six cuts in eight tournaments, seems a long way away now.

Of course the turning point of my season was finishing second to Rory (McIlroy) in the BMW PGA at Wentworth. I’ve actually spoken to my caddie (Dermot Byrne) in detail about why it all changed and we can’t put our finger on what made the difference.

What I know is that I was a lot better mentally after Wentworth. I’d no real worries and could go out and play my golf. My scores became better. I was probably chipping it a little bit closer and holing a few more putts; but, ironically, I still feel I was hitting the ball as good at the start of the year during all those missed cuts as I’ve ever hit it. I’d a strong flight, and I was getting a lot of clubhead on the ball. I was probably hitting it better in some of those tournaments than I was at the end of the year. It just shows: when things are going your way, you ride the wave.

From Wentworth up to the season-ending DP World Tour Championship in Dubai where my fifth place finish left me 10th in the Order of Merit, I had 12 finishes inside the top 25. I had my chances to win too; I still look back on Wentworth as one that got away on, but I also had opportunities in Wales, Scotland and Turkey and was also in contention in Dubai.

It’s great when you’re contending. There is nowhere else I would rather be. It’s what I play this game for. I don’t play for the money or the extras that come with it. I play the game to contend at the weekend and really enjoy having a chance to win. That’s what I love about it. Sometimes, because I enjoy it so much and want it so much, I can get too far ahead of myself, but I am learning to take a step back and to live in the moment.

I don’t know when I will play again. I’m thinking of missing out Abu Dhabi next month and the other desert tournaments. I believe a good break – just ticking over and doing some work in the gym – is what I need and I will work out that schedule with Conor, with the Masters of course included.

My dad and brother will be coming with me and whenever that letter of invitation drops through the letter box of Horizon Sports, I will be delighted. I’ll most probably post a photo of it on Twitter.

But I’m looking forward to the next few weeks. These are exciting times for Wendy and me. We haven’t set a date for the wedding or anything yet, maybe the end of next year or the year after, but we are looking forward to getting around to see family and friends and to enjoy Christmas. It’s been a great year, and it’s time to enjoy it.

1 Gordon D'Arcy: I know what Joe and Cheika would do. Fix the basics
2 Darragh Ó Sé: Cork and Donegal went out with the wrong attitude
3 Can Solskjaer’s Man United find their groove when it matters?
4 Simon Easterby admits Ireland may need to take new line on maul
5 Gerry Thornley: Ireland don’t want to box themselves into a corner
Real news has value SUBSCRIBE