Tiger Woods insists he is ‘ahead of schedule’ for return

‘My speed is back way up and that’s fun. I’m touching numbers that I did 15 years ago and that’s cool’ 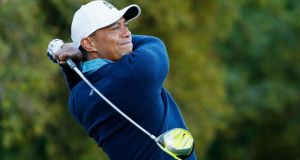 Tiger Woods hits a shot during a practice round prior to the start of the Phoenix Open at TPC Scottsdale in Arizona. Photograph: Scott Halleran/Getty Images

Tiger Woods insisted his game was “ahead of schedule” as he prepared for his first event of 2015 at the Waste Management Phoenix Open.

Woods was last in action at the Hero World Challenge in December when he finished joint-last in the 18-man field during a week notable for Woods being physically ill and a series of chipping errors around the greens.

That was his first appearance since missing the cut at the US PGA Championship in August as he continued to struggle with his recovery from back surgery.

But following an early morning practice round at the tournament where he has not teed up since 2001, Woods was confident the work he was doing with swing coach Chris Como was beginning to bear fruit.

“It’s great to be back, it’s been a long time since I’ve been back,” he told a press conference.

“I had to take a little break there for a while (after the Hero World Challenge), that flu bug got me pretty good for another, probably, three weeks afterwards.

“I lost a lot more weight so I was finally able to start gaining weight again and then start training and then I started practising a little bit with Chris.

“We’ve done some really good work, it’s just a continuation. We have a gameplan of where we need to get to and we’re ahead of schedule at each stage of the gameplan and that’s a good sign.

“Overall I’m very pleased to go out there and hit shots and I’m cranking up the speed, the speed is coming back up and it’s going to be a fun year.

“I’m a lot longer than I ever thought I could be again. My speed is back way up and that’s fun. I’m touching numbers that I did 15 years ago and that’s cool.”

Woods made headlines earlier this month when he was pictured with a tooth missing while watching girlfriend Lindsey Vonn set a new record for women’s alpine skiing World Cup wins in Italy.

Agent Mark Steinberg quickly stated that the tooth had been lost while Woods, who was wearing a partial skeleton mask and sunglasses at the time, had been hit by a camera and the 14-time Major winner was happy to explain the situation in a jovial exchange at TPC Scottsdale.

“Lindsey had finished (and) I had walked up to the top, I still had my mask on so no-one knew who I was. (I was) trying to blend in because there’s not a lot of brown dudes at ski races,” he joked. “That was the whole idea of why I wore the mask.

“I came up above and I was looking down and all the camera guys were below me on their knees or standing or getting on the ground, moving all around, trying to get a picture because she is hugging people and saying congratulations to the other racers.

“The dude with one of the video cameras on his shoulder was kneeling right in front of me, (he) stood up, turned and caught me square in the mouth.

“He chipped that one, cracked the other one. I’m trying to keep this thing (mask) on so the blood is not all over the place and luckily he hit the one I had the root canal on, that’s the one that chipped.

“The other one had to be fixed as well because that had cracks all through it.”

He added: “The flight home was a joke. I couldn’t eat, I couldn’t drink until he fixed it – put the temporaries on. I couldn’t have anything touch it, even breathing hurt.”