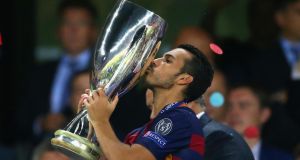 Pedro scored the winner for Barcelona in the Super Cup final just hours after it was announced he had asked to leave the club. Photograph: Getty

Harrington and Clarke back Lowry for Major

The US PGA Championship begins at Whistling Strait tomorrow with Shane Lowry looking to pick up where he left off in Ohio last week by challenging for his first Major title.

Among those who believe the Offaly man has what it takes to become the next Irish Major winner are Padraig Harrington and Ryder Cup captain Darren Clarke.

However Lowry’s defence of his WGC- Bridgestone title next year is already looking problematic after the European Tour announced the competition won’t form part of its schedule tor 2016due to a clash in dates with the French Open.

While all the attention has been on world number one Rory McIlroy’s fight to return to fitness in time for the start of the tournament in Wisconsin tomorrow, three-time Major winner Harrington has also been battling with a knee problem picked up playing tennis with his children, although his main concern this week is getting his attitude right.

Having already lost Tommy O’Donnell after their win over Wales in Cardiff Ireland could be dealt another blow ahead of the Rugby World Cup after it was confirmed Andrew Trimble will miss Saturday’s warm-up game against Scotland and remains a significant injury concern ahead of the tournament.

Meanwhile captain Paul O’Connell was last night named the Rugby Writers of Ireland Player of the Year for the second time, and the old warhorse is enjoying preparations ahead of his fourth World Cup campaign.

South Africa’s preparations for the World Cup have been far from ideal, with the Springboks losing an unprecedented four games on the bounce as well as dropping for fifth in the world rankings following their Rugby Championship defeat to Argentina.

And now the Congress of South African Trade Unions (Cosatu) has accused the South African Rugby Union of selecting the side for last Saturday’s loss based on “racist choices.” A statement made by Western Cape general secretary Tony Ehrenreich said the organisation felt transformation in the sport was going backwards and have urged management to select more non-white players.

In his column Darragh Ó Sé looks as Mayo’s Aiden O’Shea in the wake of his impressive showing in the All-Ireland quarter-final win over Donegal last Saturday and suggests while a change in attitude has seen the 25-year-old flourish he needs to get better ball to dominate Jim Gavin’s Dublin.

Galway take on Tipperary at Croke Park on Sunday for a place in the All-Ireland hurling final and Anthony Daly believes the Tribesmen’s new tactical set-up is behind their improvement this season.

Manchester United target Pedro scored perhaps his last goal for Barcelona deep in injury time to give his side a thrilling 5-4 win over Sevilla in the Super Cup in Tbilisi. Two stunning free-kicks from Lionel Messi had put Luis Enrique’s side 4-1 up before Sevilla fought back to take it to extra time.

Prior to the game Barcelona technical secretary Robert Fernandez confirmed Pedro has ask to leave the club but any potential suitors would have to meet his €30 million buyout clause.

Adam Nolan and Joe Ward have reached the quarter-finals of the European Elite Championships in Bulgaria, with Nolan producing an impressive performance to shock Russian number one seed Radzhab Butaev.